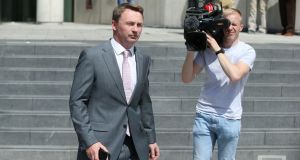 The group editor of the Mail’s newspaper titles in Ireland has stepped down. Sebastian Hamilton applied for redundancy earlier this year as part of cutbacks at publisher DMG Media Ireland.

It is understood he agreed to stay on for a six-month period after the restructuring so that a successor could be appointed.

Conor O’Donnell, the editor of the Irish Mail on Sunday, will take on the role of group editor of Mail Newspapers Ireland. From Dingle, Co Kerry, Mr O’Donnell began his career at the Kerryman and has been with the Mail since 2008.

The move was confirmed to staff at a meeting in Dublin this afternoon.

Mr Hamilton (49) has been with the company, ultimately owned by Viscount Rothermere, for 16 years.

“I would like to thank Sebastian for his dedicated service to Mail Newspapers Ireland,” said DMG Media Ireland chief executive Paul Henderson.

A former political journalist at the Sunday Times and the Scotsman Group, Mr Hamilton joined the Mail on Sunday in 2003 and moved to Dublin shortly after it launched the Irish Daily Mail in 2006, serving as assistant editor.

He became editor of the Irish Mail on Sunday in 2009, before assuming the group role four years later. He will also leave his role as director of Associated Newspapers (Ireland), the company behind DMG Media Ireland.

The company, which now also publishes the digital titles Extra.ie and Evoke.ie, embarked on a programme of cost cuts in early 2019, with some 40 employees leaving the Dublin office. The cutbacks – a mix of voluntary and compulsory redundancies – were attributed to falling newspaper sales and a drop in advertising revenue.

Associated Newspapers (Ireland) made a pre-tax profit of almost €1.2 million in the year to the end of September 2018, its most recent accounts show, but sought to reduce its Irish costs in light of the decline in the print market.