Younger viewers are switching off TV 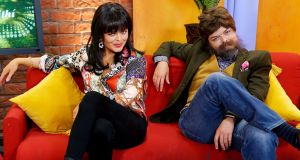 On paper, the answer seems obvious. Generation Z has options. The whims of channel schedulers are immaterial to their days. They might catch up with a broadcaster’s much-hyped show on their players but then again they might not even hear about it until it pops up on Netflix to compete for their indifference.

Television broadcasters, on the other hand, often seem to froth at the prospect of people too young to be millennials responding to their efforts in the how-do-you-do-fellow-kids department. It’s TV people who are the needy ones. Right?

Yes, but there are so many chickens and eggs here, you could open a speciality café.

What we know is that younger viewers are switching off traditional television faster than was expected just a few years ago and – as a certain theme tune remembered only by over-35s would have it – going and doing something less boring instead. Some of them may never have switched it on much in the first place.

A report commissioned by the Broadcasting Authority of Ireland (and mostly concerned with its Sound & Vision scheme) has noted what looks like a stark and rapid decline in the annual viewing minutes of Irish 15-24 year olds between 2016 and 2018.

Its authors, the consultancy Mediatique, conclude that this has been to the benefit of subscription video-on-demand services like Netflix, free apps such as YouTube and the games industry.

That’s not all this report said though. It also observed that 15-24 year olds were more likely than older cohorts to say there was “not enough” Irish content on television and radio.

Almost 60 per cent of 15-24s said this was the case in an Ipsos MRBI telephone survey, compared to 42 per cent of 25-34 year olds and 35 per cent of 35-44s, with older age groups less inclined again to give a negative answer. For Mediatique, this “raises questions about how adequately younger audiences are being served by Irish broadcasters”.

The finding is muddier than it could have been given both television and radio were included in the same question, but it still reads like an “it’s not us, it’s you” statement by younger viewers – one that will have broadcasting executives sighing over their spreadsheets.

The viewing trends documented by Mediatique will be no surprise to them, however. The ever-more-elusive nature of the younger audience will have been evident in their daily updates from ratings body TAM Ireland. It’s a sensitive issue that nobody likes to talk about much lest it scare off another batch of advertisers.

But the figures show that in 2018 younger people watched “considerably less TV”, as Mediatique put it, than they did only two years previously. The average daily minutes for 15-24s plummeted from 109 minutes to 70 minutes, it said.

The decline, based on Nielsen ratings research compiled for TAM Ireland, was not only sharper than that witnessed among even slightly older viewers, it was steeper than Mediatique had previously forecast.

Cash-light broadcasters could be forgiven for concentrating on the loyal, almost stable older audience even more than they already do and cutting their losses when it comes to the young. The trouble is, this strategy doesn’t point to a sustainable future, and for RTÉ it would be a dereliction of its public service remit. Broadcasters, both in and outside Ireland, are instead trying to reach TV-phobic younger viewers through their player apps.

The big caveat with the Nielsen ratings is that they only relate to content consumed “live” on linear television channels or recorded to set-top boxes and watched back within seven days. This misses out the volume of clicks to the likes of the RTÉ Player and the Virgin Media Player, the viewing statistics for which are more difficult to track.

Occasionally, broadcasters will release some upbeat-sounding updates on their player growth. In August, for example, Virgin Media highlighted that streaming on the Virgin Media Player was up 61 per cent year-on-year – the increase for “catch-up” viewing was a more modest 7 per cent, pointing to greater “live” use of its player app as a substitute for a TV set.

RTÉ, meanwhile, has been tentatively dabbling with short-form “RTÉ Player Originals”, the most-watched of which is the Doireann Project, starring 2fm’s naturally funny breakfast host Doireann Garrihy. It’s now back for a second series in which many of the laughs are, ironically, dependent on viewers being familiar with celebrities who made their name on old-school television.

RTÉ says the first series attracted 220,000 streams, which is not a huge figure by “normal” television standards. But even if millions were pressing play on all of its offerings, it wouldn’t compensate RTÉ for the migration of younger viewers away from traditional television. An online viewer is simply worth less to a broadcaster, in ad revenue terms, than one who sticks with linear television.

This is just one reason why RTÉ’s online services ended up being supported by €10.8 million in public funding in 2018, still leaving a €1 million deficit – a fact that was pointed out by Virgin Media Ireland boss Tony Hanway in a recent letter to Minister for Communications Richard Bruton. He described it as “a rather worrying statistic considering RTÉ’s push to become a multimedia and digital-first organisation”.

Pretty much every broadcaster will be worried. The generation weaned on YouTube and online gaming is coming of age soon. Then what?

1 Varadkar resigns amid warning impasse will hit the economy
2 Google completes purchase of Treasury Building for €120m
3 Garda mobile contract win causes concern over Eir’s use of Huawei kit
4 A maverick taking on the Irish whiskey establishment
5 How can I view my dead brother’s will if I’m not the executor?
6 Appeals board grants planning for 354 Greystones homes
7 Why Sweden ditched its negative rate experiment
8 Knock gets visit from world’s largest passenger plane
9 Nineteen staff made redundant by Nama share €1m
10 AIB lines up former HSBC executive McDonagh as chairman
Real news has value SUBSCRIBE