Dettol can’t revive the office – only employers can do that 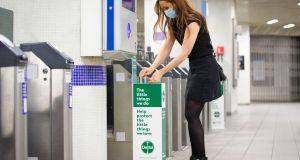 Dettol wants people to leave their houses and get out and about again, but not all if its advertising has gone down well. Photograph: Matt Alexander/PA Wire

“Hearing an alarm. Putting on a tie. Carrying a handbag. Receptionists,” the ad began, immediately triggering suspicion. Who enjoys hearing an alarm? Were people still wearing ties before the pandemic? Are handbags work items now?

It got worse. Once this ecstatic employee had finished bothering the receptionist, they saw their “second family”, had some “proper bants”, checked out the “plastic plants” and laughed freely at “the boss’s jokes”.

Then after “hearing buzzwords” and “accidentally replying-all”, they ended their day by “leaving early for a cheeky afternoon in the sun” (as you do) and didn’t cringe once throughout any of this.

While Trainspotting’s “choose life” rant was fierce and satirical, this British nostalgia for office life seemed at best clumsy, and at worst clueless.

David Brent, the guitar-toting narcissist created by Ricky Gervais, would have liked this ad. But when it appeared in London Tube stations last week it didn’t just raise hackles, it exploded them. A second version, an oddly sentimental tribute to the mundanities of commuting, fared little better.

Would the copywriting alone have prompted a backlash? Perhaps, but the muddled political context made one inevitable.

Days earlier it had been front page news that the UK government was poised to launch a campaign encouraging people to return to the workplace. This led some social media users to misunderstand one tweet that included an image of half the ad and commented “omg they are gagging for us to return back to the office” and conclude that this was the Conservatives’ attempt at office propaganda. It wasn’t – it was an ad for Dettol.

The “Keep Protecting” campaign, devised by advertising agency McCann, wasn’t really selling the dubious joys of the office, commuting or school (a third ad toasted “besties” and “rude words on calculators”). It was marketing disinfectant in a world of risk. And to do that it had to first advocate the taking of risk.

So it offered a bouncy, jaunty vision of a society in which people are once again happy to leave their houses – an act that, without wishing to sound all Minister for Trampolines here, was inherently risky even before Covid-19. There was logic to this approach, even if the execution was patronising and the timing dodgy.

Dettol, in the short term, has been having a brilliant pandemic. Virus-wary consumers stocked up as much disinfectant as possible in the first half of 2020, sending global sales up 62 per cent. This proved boom-time for its parent group, Reckitt Benckiser, though its good lockdown fortune didn’t quite extend to one of its other brands, Durex.

But it’s not hard to see a potential issue on the horizon for Dettol. If people’s perception of risk winds up being permanently recalibrated by the caution ingrained during the pandemic, there may be fewer cuts and scrapes to treat, fewer communal surfaces to clean.

The Boris-instigated “get back to work” campaign never materialised, presumably because the UK’s Covid-19 case numbers have swollen too much to prioritise the saving of the fabled “Pret economy”.

Maybe somebody also figured out that a significant percentage of people have no choice in when they return to the office.

In Ireland, there is no suggestion of a similar campaign, with the Irish Government sticking for now to its news conference line to work from home if possible – a message that won’t exactly reassure people who don’t have that luxury.

But if governments won’t do it and Dettol isn’t capable, can anyone really market the office as an, ahem, desirable destination in 2020 and beyond?

The most passionate candidate for the task in recent years has been co-working cheerleader WeWork, a commercial property giant that adopted the slogan “do what you love” and other trite niceties to persuade small businesses to pay it rent. WeWork hit the skids before the pandemic and had to be bailed out by its largest investor, Softbank, in a story of corporate over-expansion that hasn’t quite reached its ending.

WeWork used to find it easy to convince self-employed people who had the technology to avoid the office that they should treat themselves to the privilege of a hot desk in a building with, to quote the Dettol ad, “caffeine-filled air”. The plants may not even have been plastic.

Now this “sell” must compete with a much more vital reflection of status: the ability to limit exposure to a highly-contagious virus by staying at home.

Ultimately any campaign to sustain the office economy is doomed to run into the reality that the audience is just too diverse and too divided. Survey after survey confirms a spectrum of opinion, from virus anxiety and fear of losing work-life balance gains to disillusionment with remote working and hunger for the social interactions and serendipitous encounters that physical workplaces bring.

It’s no good trying to speak to or for everybody. Age, personality, housing status, caring responsibilities and quality of living arrangements will each have a bearing on attitudes, as will the actual nature of the job.

Not all workplaces were created equal either: for every person racing to reclaim their parking spot and airy corner office there will be many more wondering how they ever got any work done in a noise-polluted, windowless coop and why that was expected of them.

Forget cutesy advertising. The desertion of the office will end in one of two ways: either employers will make offices great again or they will compel their workforces to return regardless of the misery this yields.