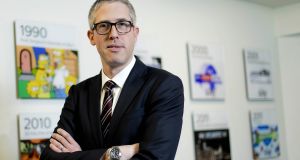 Sky Ireland has opened a €250,000 support scheme that will give 25 companies free television advertising airtime worth €10,000 through its AdSmart platform, which allows advertisers to target viewers by location or lifestyle.

“It is important for small businesses coming out of lockdown to be able to tell people that they are open again,” said Malcolm Murray, director of Ireland sales for Sky Media, the advertising unit of the broadcaster, pay-TV and broadband company.

The scheme, which has a closing date of May 29th, is open to small and medium-sized enterprises (SMEs) that have been trading for at least a year and have up to 50 employees.

The SMEs must be either new to television or returning after an absence of 12 months and they must commit to making a 30-second television ad approved by advertising clearance body Clearcast.

Mr Murray said applications were “coming in thick and fast” from businesses such as clothing and furniture retailers and household product manufacturers, as well as organisations from the finance, health and education sectors.

“Many of them may not have considered television advertising before,” he said.

AdSmart allows advertisers to target certain subscribers rather than the entire audience of a particular ad break on Sky channels. The technology, which has been used by more than 100 brands since its launch, widens the appeal of television advertising to companies that might only want to reach viewers in certain regions or counties.

It is also possible for advertisers to target ads at particular demographics – such as “urban starters”, “budgeting families” or “practical pensioners” – with Sky mapping its own subscriber information to third-party data from profiling experts Experian.

Known as addressable advertising, AdSmart has been available through Sky in the Republic since 2017 but is expected to receive a boost in the third quarter of 2020 when it is extended to Virgin Media Television channels in Ireland as part of a partnership between the two pay-TV companies.

It will also become available through the next generation of Virgin set-top boxes.

“That will help grow the awareness and reach of addressable advertising,” said Mr Murray.

More hyper-local targeting capability is on its way. From later this year, advertisers using AdSmart will be able to target campaigns at television viewers using the first three digits of subscribers’ Eircodes.

Mr Murray said he was optimistic that television advertising revenues would recover. Although viewing to the small screen is up, the Covid-19 economic shutdowns saw many advertisers defer campaigns in the second quarter.

“We are starting to see some late money come in, which is a positive sign,” he said. “Whereas March and April would have been more about deferment of activity, it is now more about people picking up the phone and wanting to come back on.”