Consumers are back after lockdown, and that means so are the advertisers 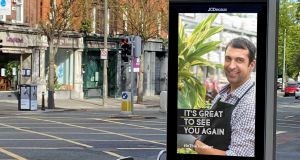 JCDecaux began the ‘It’s Great to See You Again’ campaign in May. Photograph: JCDecaux

“It’s great to see you again,” is the line that has been used on JCDecaux’s out-of-home advertising sites since Ireland began its first tentative steps out of lockdown in May. It could equally apply to the industry’s “welcome back” for paying clients, who are returning to street panels, bus shelters and anywhere advertising infrastructure has been installed to capture the attention of normal, non-apocalyptic rates of passing humans.

While almost the entire advertising market took an unprecedented hit in the second quarter, the out-of-home channel suffered a unique implosion. With everybody stuck at home, most brands weren’t about to spend a cent on campaigns that would, usually, be aimed at weary commuters, wallet-ready shoppers or young city dwellers. Worse, the abrupt unravelling came just as the out-of-home sector had been poised to benefit from growth in the number of digital ad sites and campaign-triggering events such as Euro 2000 and the Olympics.

Understandably, the sector is now keen to quantify the ways in which people are out and about again. Out-of-home agency Kinetic, for instance, quotes July research that suggests grocery shoppers’ lockdown-period shift to a once-weekly, queue-avoiding “big shop” has now eased off, with regular “top-up” grocery buying, as well as ventures into enclosed shopping centres, on the rise again.

This is important, as there is no point in running ads in deserted spots. But the still subdued nature of city centres may yet prompt longer-term readjustment: if the corollary of a local, suburban revival in activity is permanently lower inner-city footfall, the location of ad sites will need to catch up.

Either way, the advertising industry can be relied upon to highlight any favourable changes in consumer behaviour. One apparent feature of cinemagoing since July, for example, is a tendency for the thin stream of returnees to show up nice and early for films, making them more likely to catch any big-screen ads.

Perhaps owners of transport ad sites could adopt a similarly sunny attitude to post-Covid “dwell times”. There may be fewer people even trying to take public transport, but if reduced-capacity, peak-hour services are full by the time they reach certain stops, left-behind commuters will be available to stare at shelter posters, and whatever it is they are selling, for quite a while.