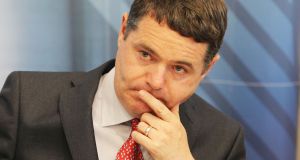 The Minister of Finance & Public Expenditure and Reform Paschal Donohoe holds shres in Diageo and is the target of drinks industry lobbying. Photograph: Collins Photos

For an hour at Wednesday’s Summer Economic Statement briefing, Minister for Finance Paschal Donohoe had been as sure-footed as he could have hoped for on his first big media set-piece as the man in charge of the State’s money. Cheerful, adroit, well-prepared, and not half as self-regarding as his predecessor.

Then, right at the end, Donohoe tripped over his own tongue. A journalist asked how the Minister, as the ultimate target of a ferocious lobbying campaign by the alcohol industry to lower taxes on alcohol, could justify holding on to his Diageo shares. It is a perfectly valid question.

Junior minister Patrick O’Donovan dived in with a bone-headed attempt to defend his boss by declaring that he eats Pringles, and asking would this be a conflict of interest. Everybody scratched their heads. Then Donohoe mumbled something about consulting his family and said his private interests don’t influence his politics.

This totally misses the point, of course. It doesn’t matter if his private interests influence his political decisions. It matters only whether or not they might give the appearance to others that they could. A finance minister holding shares in an alcohol giant in the midst of a strident budget alcohol debate is a clear conflict of interest.

If Donohoe was truly on the ball, he would have the proper answer, which he will inevitably have to give at some stage, ready: “I’m going to sell the shares.”

But he didn’t. He stumbled. Michael Noonan would never have made the same mistake.

One of the things that makes Donohoe such an interesting pick for Minister for Finance is that he had a stellar career as a corporate executive before he entered politics. After university, he rose through the ranks at Proctor & Gamble at a frightening pace to become a director of sales and marketing in the UK.

During this time, he accumulated shares in P&G, which he still holds. He has also declared the shares in Diageo, where his wife worked for many years as a senior marketer. Donohoe said on Wednesday that all his shares were accumulated as a result of his employment in the private sector.

His department said afterwards that, contrary to some previous newspaper reports, Donohoe has never worked for Diageo. Perhaps he has declared the Diageo shares that his wife accumulated during her employment. Or perhaps Donohoe bought them on the open market.

Either way, they have to go. Rightly or wrongly, there is already a perception brewing that drink industry lobbyists have the Government by the throat on the new alcohol Bill, which is marooned in the Oireachtas. The optics matter in these situations.

Previously, before he was appointed to his current role, Donohoe absented himself from some cabinet decisions related to the alcohol industry. As Minister for Finance, he can’t duck the discussions on whether or not to adjust excise on alcohol. Sell the shares, and the problem goes away.

The only other senior cabinet minister to declare directly-held equity shares is Richard Bruton, the Minister for Education. Bruton has stakes in Kingspan, Bank of Ireland, Aryzta, CRH, Smurfit Kappa and insurer FBD. He is like a one-man exchange-traded fund for the Iseq. But none of his holdings is likely to create the appearance of a conflict in his current portfolio, although they were possibly borderline when he was in charge of the Department of Enterprise.

Simon Coveney, the Minister for Foreign Affairs, doesn’t name the companies in which he holds shares, but rather he declares that Davy manages a family fund in which he has an interest. He also makes a declaration regarding Pat Gleeson’s Private Wealth Managers, a boutique firm in Dublin.

Surely Coveney means that Gleeson manages his money, and not that he has shares in Gleeson’s business. Either way, the Minister should make clearer the name of the businesses in which he ultimately has an equity business.

Donohoe, who generally projects an aura of a highly-competent and engaged minister, may well resent the media questioning that comes with his private share ownership. But it comes with the territory when you have the second-most powerful political role in the State.

The Minister for Finance makes decisions on taxation that directly affect Diageo – and, less so, P&G – and he is party to wider cabinet decisions that even the alcohol industry says are critical to its future success. Give up the demon drink shares, minister. Save yourself the hassle.

- Google has won the latest round of its tax avoidance battle with European authorities, coming out on top in a €1.1 billion tax case in France this week related to its use of its Irish entity. But global web companies, big and small, still have some head-scratching accounting practices when it comes to their Irish units.

Automattic is the US company behind Wordpress, the blogging site. All of its operations outside of the US are controlled via its Irish entity, Aut O’Mattic Ireland. It recently filed accounts for 2015, which show it had revenues of €17.3 million. These sales were then more than wiped out by €23.8 million of “research and development expenses” booked through the Irish unit, leaving nothing left to tax.

Aut O’Mattic’s accounts reveal it employs just four staff, all of whom are software engineers. How can four engineers be responsible for almost €24 million worth of research? Either they are Hindu deities with many pairs of arms, or they are simply seriously productive research engineers.

Meanwhile, I can’t figure out whether I like the Irish entity’s culturally dubious name, or if I hate it. Begorrah.

- Speaking of dodgy Irish company names, my personal favourite remains the Belmullet hairdressers above which Shell had its first office for the Corrib project. The barbers’s name? How’s She Cutting.

Shell escaped this week with a loss of about €1 billion on its Corrib investment, selling its 45 per cent stake to a Canadian pension fund. All of that grief, all the protests, all the court cases, the jailing of protestors, the ill feeling, the conflict . . . and Shell chooses to walk away, now that the hard work is done, losing its shirt on the deal.

Shell could have walked away anytime from 2005 until first gas flowed a decade later, and it might have made sense. It looks a bemusing decision now.

Consultants Wood MacKenzie valued the Corrib project for a State report on the Irish exploration industry, but the firm won’t say now what figure it arrived at. Presumably it was far higher than the valuation, as low as €1.8 billion, implied for the entire project following the Shell deal. The consortium of owners of the field pumped €4.3 billion into it.

Corrib, it seems, was a bad deal for everybody involved – the exploration companies, the locals, and the State.