From next month diamonds will be Dermot Desmond’s best friend 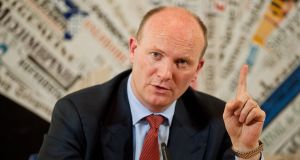 The allegations surrounding Galway businessman Declan Ganley’s attempt to win a Mexican contract to build a $7 billion state-backed mobile phone network read like a Tom Clancy novel. This week the tale became even more mysterious following sworn testimony from a senior partner of Deloitte in the US.

The story first broke with a stream of angry tweets from Ganley one evening in early November. His Rivada Networks company had just learned it was to lose out in a two-horse race for the contract to build the network, called Red Compartida.

Ganley alleged the tender was rigged, and claimed a mystery hijacker on a motorcycle had attempted to steal Rivada’s bidding documents.

Weeks after his tweets the contract was awarded to the local Altan consortium, which is backed with Chinese money. Ganley alleged a “stitch up”, which Altan and relevant Mexican authorities have denied.

Deloitte Consulting was adviser to SCT, the Mexican communications ministry handling the tender, on how to assess the bids. In recent weeks Rivada obtained a US court order to depose Brett Haan, a senior Deloitte partner. On Tuesday he sat down at a Washington lawyer’s office to give his sworn testimony.

Rivada’s lawyer warmed up by asking Haan if it was the first time he had been deposed. Haan said it was, and quipped that the lawyer should feel his heartbeat.

“You work for an accounting firm and you have a heart?” the lawyer retorted.

Answering questions from Rivada’s lawyer, Haan explained SCT had appointed Deloitte to prepare an ideal business plan for Red Compartida. Against Deloitte’s advice, the business plan was to be kept secret.

Haan said that after Altan and Rivada had submitted bids this year, he met a former colleague who had worked on the contract, Rick Keith, at Fiola Mare, one of the best restaurants in Washington DC.

According to Haan’s testimony, Keith told him “one of the bids was essentially a photocopy” of the supposedly secret Deloitte plan, which would give that bidder an unfair advantage over its rivals in the race.

“I was unhappily surprised,” said Haan.

Rivada has alleged in separate court documents that it was Altan who had access to the business plan, enabling it to submit the perfect bid aligned with the secret business plan. Altan has denied any wrongdoing.

Haan went on to describe an earlier meeting, prior to Deloitte’s appointment when it was seeking the role of adviser, with SCT undersecretary Monica Aspe and a SCT official Mario Gongora.

The meeting was to discuss whether to award without a tender the massive contract – the largest spectrum tender ever in the world – to CVG, a group that later “morphed into” the Altan consortium. According to Haan’s account, Aspe agreed with him they should go to a public tender.

Haan testified that after Aspe left, Gongora approached him and asked him to help rig the award for CVG/Altan.

“I said you can’t make a multibillion decision on the back of an envelope. It would be an international scandal that would not meet the president’s goals.... Ministers don’t get fired. I told him staff get fired, and you will get fired,” Haan testified.

According to the testimony Gongora simply “shrugged”.

Later on, after Deloitte was appointed, Haan said he was called to a meeting with Aspe and her lawyer. Haan said SCT suspected a local Deloitte subcontractor was paying officials “such as Mario [Gongora].” Deloitte was not accused of wrongdoing, but he offered to resign, which was refused. He said SCT handled the allegation.

Haan went on to describe how concerns arose at another stage over the same subcontractor’s offer to get a Chinese company to help with technical issues surrounding Red Compartida’s interactions with networks over the US border.

The deposition ended shortly afterwards with the proviso that Haan could be recalled to discuss emails as evidence.

In the days since Haan’s deposition took place SCT has appointed lawyers in the US to look into the possibility of launching a lawsuit there against Ganley over his public remarks. SCT says Rivada was properly disqualified for not submitting proper evidence of financial backing, which Ganley’s company denies in turn.

SCT has also denied any wrongdoing, and said Gongora had moved on from the department months before Red Compartida was awarded last month.

Ganley’s company, meanwhile, is pursuing legal action in Mexico to try to force its way back into the tender reckoning. It alleges in US court documents that SCT is bringing forward the final contract-signing date with Altan to this month, which would give its proceedings added urgency.

Rivada is also planning to depose Rick Keith, who stayed on to advise SCT after Deloitte’s role ended, to ascertain what he observed about the awarding of Red Compartida. It plans to use Keith’s and Haan’s sworn testimony in its Mexican case.

It is unclear whether Rivada will get back into the contract race but it sounds like Ganley will not go quietly either way.

From next month diamonds are Dermot Desmond’s best friend. Mountain Province Diamonds, a Canadian mining company in which he is the largest investor with a 23 per cent stake, will offer for sale in January its first tranche of diamonds dug from Gahcho Kue.

The world’s largest new diamond mine, deep in Arctic tundra, is 49 per cent owned by Mountain Province Diamonds (MPD), with the remainder owned by De Beers, which also operates the mine. Each of the joint venture partners has the right to take up rights to the diamonds that flow from production. MPD’s first batch will be sold in Antwerp by famed diamond broker Bonas-Couzyn.

Viewings in Antwerp of the MPD diamonds will take place between January 16th and 25th, and bids can be taken online. But if you fancy swanning along for a quick spot of diamond window-shopping, or just a plain old nosey, you can forget it.

Every prospective viewer and bidder must register with Bonas. Six people can register to view the MPD diamonds, although only four at a time can enter the viewing room. Only two people from any given company are allowed to bid.

All directors, registered viewers, bidders, company directors and shareholders must register with Bonas, and must even include their passport details.

Desmond’s stake in the company is currently worth about $180 million. Production at the mine has only just commenced, however, so he will probably be in no rush to cash it in. He has, after all, been on the shareholder register for almost two decades.

Well-known commercial solicitor Michael Kavanagh has been appointed as chairman of Dublin-based firm LK Shields. Emmet Scully, who heads up its corporate team, will take over as its new managing partner

Kavanagh heads up LK Shields’ litigation and dispute resolution department, and will continue to do so after he takes up the chairman’s role.

He has been extremely busy in recent weeks, with cases including a high-profile action involving Nualtra, a health supplements company backed by investors including Independent News and Media chairman Leslie Buckley.

Nualtra is defending a trademark infringement case brought against it by rival Aymes International and a Dutch company Nutrimedical. The trial is ongoing, and is due to resume in the new year.