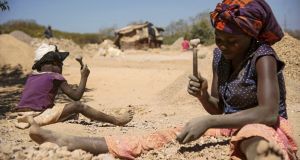 A child and a woman break rocks extracted from a cobalt mine at a copper quarry and cobalt pit in Lubumbashi. Instead of benefiting from its vast mineral wealth, Congolese are among the world’s poorest people, with a per-capita income of $800. Photograph: Getty Images

Behind every clean electric car there is cobalt. And behind cobalt is the Democratic Republic of Congo.

Cobalt is a critical element in lithium-ion batteries used in electric cars. Such batteries already consume 42 per cent of the metal and demand will soar as the world switches from petrol and diesel cars to electric ones.

This week, Britain followed France in declaring a ban on such vehicles from 2040. And in Ireland, the Climate Change Advisory Council on Wednesday said Ireland should phase out the vehicles – though it added that the Government needed to warn consumers of the costs of doing so.

Soon, almost anyone in the rich world will be able to drive safe in the knowledge that they’re being kinder and gentler to the planet.

Did I mention the Democratic Republic of Congo? Sixty per cent of the world’s cobalt comes from this central African country, one the size of western Europe and with gargantuan problems to match.

Some industry analysts are predicting a 30-fold increase in cobalt demand by 2030, much of which will come from Congo. Cobalt prices doubled in the past year alone.

In Congo, they say, you can find every element in the periodic table. But this abundance has not done its people much good. A recent report by Global Witness found that 30 per cent of revenue paid to state bodies by mining groups from 2013 to 2015 – about $750 million (€641 million) – vanished.

A separate report about Joseph Kabila, the president, whose family dominates 80 lines of business, gives a clue as to where some of it might have gone. Instead of benefiting from its vast mineral wealth, Congolese are among the world’s poorest people, with a per-capita income of $800 (€684). It is enough to give the socially conscious Tesla driver sleepless nights.

Does it have to be like this? Resources are hard to cope with even if you have the best institutions. This is not a description that can be applied to Congo. The country has been misruled since it became the personal colony of King Leopold II of Belgium in 1885.

He used the Congolese as slaves, hounding millions to death and chopping off the limbs of those deemed too tardy in stripping the country of its natural wealth – mainly rubber used for tyres in the first auto boom.

In 1960, a brutalised Congo won independence. The Belgians, the French and the British – hoping to maintain control over copper and cobalt-rich Katanga province – unsuccessfully tried to engineer its secession. For Ireland, that conflict is recalled in the Siege of Jadotville, where Irish soldiers on a UN peacekeeping mission were involved in a five-day battle with secessionists.

When that failed, the West threw its weight behind Mobutu Sese Seko, a leader whose anti-Communist credentials made him an ally. In return for Mobutu’s support, western governments ignored his peccadilloes: which, sadly for the Congolese, involved plundering the country.

After three decades, Mobutu fell. But the policy of colluding with Congo’s elite to strip ordinary citizens of their birthright has gone on unabated. The West has poured in billions in peacekeeping and aid. But foreign mining companies have extracted billions more in gold, diamonds, tin, coltan, copper and cobalt.

Wittingly or unwittingly the big miners operating in Congo have helped fund this institutionalised looting.

Industrial mines operated by the likes of Glencore, the world’s biggest cobalt supplier, may have better standards than the artisanal mines that pock the landscape, where labourers, including children, often work in the most wretched conditions. But, with the best will in the world, it is hard to verify whether cobalt from these mines is entering a supply chain of dizzying complexity, which may involve mines in Congo, smelting in China and sale, as part of a laptop or electric car, in Los Angeles or London.

Companies such as Apple, HP and Samsung have joined an effort to bring more light to the supply chain. Another group has announced its intention to expand a scheme that monitors the “conflict minerals” of tin, tungsten, tantalum and gold.

Yet even verifying the supply chain is not a painless solution. When US legislation came into force in 2010, requiring companies to declare whether violent groups were profiting from minerals, many simply boycotted Congo as a supplier, throwing hundreds of thousands of artisanal miners out of work.

Ensuring that ordinary Congolese people actually benefit from the riches beneath their feet is a devilishly complex business. But it should not be beyond the wit of the same clever people who invented the electric car.