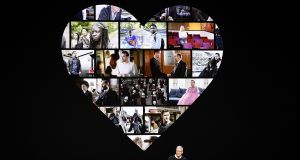 ‘We love TV,’ says Apple chief executive Tim Cook. And they’re not the only ones. Photograph: David Paul Morris / Bloomberg

The arrival of Apple TV+, Disney+ and an array of new subscription video-on-demand (SVOD) services may tickle the fancy of some viewers, bamboozle others and leave others still utterly nonplussed.

The evidence so far is that our animation ones certainly can. Apple’s pre-launch spending spree included acquiring a film called Wolfwalkers by Oscar-frequenters Cartoon Saloon. Wolfwalkers, directed by Tomm Moore and Ross Stewart, is the story of a young apprentice hunter called Robyn who comes to Ireland with her father to wipe out the last pack of demonic wolves. Its list of backers include Screen Ireland, the Broadcasting Authority of Ireland and RTÉ.

The Kilkenny-based company is also working on projects with big-spenders Disney and Netflix – the latter is making a big push on kids’ content, the former has spent almost a full century proving it knows how to reach children.

And this is just one example of a company that is playing the content-hungry field as tech giants and Hollywood entertainment empires step up their pursuit of young eyeballs. Last weekend saw the return of the Animation Dingle Festival, the Co Kerry event co-founded by Jam Media’s John Rice, where Ireland’s cluster of animators rubbed live-action shoulders with key decision-makers from Amazon Prime Video, Netflix and some longer established names: Cartoon Saloon’s Oscar-nominated director, Nora Twomey, was the perfect choice of keynote speaker.

The industry has embarked on a critical landgrab phase, rich with opportunities. Will each and every SVOD player still be throwing this much cash at content in a decade’s time? Probably not, but with the right State support, the animation sector could be one of the big winners between now and then.