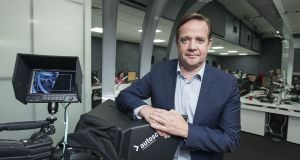 Virgin Media Television viewers will soon be shown different ads depending on who they are and where they live under a partnership between Virgin and rival Sky.

Virgin Media will use Sky’s AdSmart, its targeted advertising capability, as well as technology developed by its parent company Liberty Global on its platform from the fourth quarter of 2019 in the Republic and from July in the UK, it said on Wednesday.

The partnership was first announced in June 2017.

Virgin Media said it would make it available on Virgin Media One, the channel formerly known as TV3, with trials starting by the end of this year.

Sky AdSmart has been available to advertisers here since 2017 and currently applies to 13 Sky channels, although agencies say the range of metrics by which Irish viewers can be targeted is still limited.

Targeted, or addressable, advertising means the ads served to viewers of linear television in the commercial breaks vary according to regional location and certain other demographic information.

As this enables television advertisers to pinpoint their target markets, as they would through online advertising, it is seen as an important tool for broadcasters at risk of losing further share of the ad market to tech companies.

Sky Media will act as the advertising sales agent for the Virgin and Sky partnership, which covers both linear and video-on-demand advertising.

“This is a very exciting time as we count down to the launch of the next generation of television advertising across our network,” said Virgin Media Television managing director Pat Kiely, speaking at an industry summit in London.

“Our partnership with Sky will ensure that television advertisers, new and old, will have access to an extended reach of 30 million targetable TV viewers in the UK.”

Sky’s AdSmart technology will also be taken up by US broadcaster NBC Universal, an extension that follows the acquisition of Sky by NBC’s parent company Comcast.

5 How to avoid a communication breakdown

9 Why Irish households are not, after all, among the best off in the EU