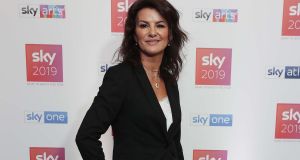 Deirdre O’Kane, pictured at a Sky event in Dublin’s Westbury Hotel in February 2019, will front a new stand-up comedy series on Sky One. Photograph: Robbie Reynolds

The five-part series with the working title Deirdre O’Kane: Live from Dublin will be filmed at the Olympia Theatre over four nights next April and air on the UK broadcaster’s main channel in autumn 2020.

The show, which will see a mix of big-name comedians and new talent join O’Kane on stage, follows Sky’s 2017 call for pitches from the Irish independent production sector and a subsequent development deal with Dublin-based Kite.

“The big green light from Sky is much appreciated,” said Darren Smith, managing director at Kite, which makes Ireland’s Fittest Family for RTÉ and Gogglebox Ireland for Virgin Media Television.

The one-hour format will be similar to the BBC’s long-running stand-up series Live at the Apollo, but there will be a “musical twist on things”, while Irish talent will be pushed throughout.

The financial heft of Sky and O’Kane’s “own little black book” of comedy contacts would combine to make a strong guest list, Mr Smith added. “It’s not a hard sell to invite comedians to come to Dublin to do Dee’s show.”

Audience tickets are expected to go on sale through Ticketmaster in early 2020.

“It’s beginning to feel very real,” said O’Kane. “We’re chatting to some big names and I’m pulling out all the stops to make sure it’ll be great craic altogether.”

Kite’s track record in comedy encompasses theatre productions such as Copper Face Jacks: The Musical, while one of Mr Smith’s earliest television jobs was the RTÉ2 stand-up series recorded at Montreal’s Just For Laughs festival.

The company worked with O’Kane on Are You There, Garth? It’s Me, Margaret, Fiona Looney’s 2015 play about the Garth Brooks Croke Park concert saga, while the comedian and actor also does voiceover on Gogglebox Ireland.

In February, O’Kane hosted a Sky media event in Dublin that included stand-ups Romesh Ranganathan and Rob Beckett. The event was the first held by Sky in Ireland since the broadcaster and European pay-TV business was acquired by US telecoms giant Comcast, ending Rupert Murdoch’s long relationship with the company.

Its investment in Irish comedy comes as Sky announced it will set up a new comedy channel supported by a programming deal with its parent.

“The value of an hour of television to a broadcaster now is based on how often they can play that hour,” said Mr Smith. He described Sky’s role as a “third customer” for Kite as an important one, in light of the often precarious nature of the industry. Virgin recently axed Kite’s Ireland’s Got Talent after two seasons.

The cancellation was “not the fatal blow” to Kite that it might once have been, Mr Smith said, as it has eight other shows in production, with the potential to use the Sky series “as leverage and a calling card for other UK work”.

Sky’s main Irish commissions to date are Moone Boy and 50 Ways to Kill Your Mammy, while Penny Dreadful, its co-production with US network Showtime, filmed at Bray’s Ardmore Studios. In late 2017, it said it would set aside a €2 million content fund for Irish productions.

“We’re thrilled to be teaming up with Kite to bring a big stand-up show from Dublin hosted by the brilliant Deirdre O’Kane and joined by a host of guests who will no doubt raise the roof,” said Sky Ireland chief executive JD Buckley.

O’Kane is “one funny woman”, said Phil Edgar-Jones, head of entertainment at Sky. “Ever since her star turn in the brilliant Moone Boy, we’ve been wanting to create a show around her unique talents and made entirely in Ireland.”