Stadium operator paid €2m in dividends to IRFU and FAI 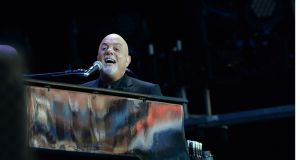 Events including Ireland’s historic win over the All Blacks and a Billy Joel concert at the Aviva stadium last year contributed to the firm operating the stadium recording an operating profit of €6.9 million.

New accounts filed by New Stadium DAC show that it paid €2 million in dividends to be shared by its shareholders, the IRFU and the FAI. This came as the stadium firm recorded a pretax loss of €3.3 million, although this figure takes account of hefty non-cash depreciation charges of €10.12 million.

Fees paid by the IRFU and the FAI to the stadium firm declined from €6.4 million to €5.8 million last year.

In turn, the firm made €750,000 in lease payments to the IRFU for the rent of the stadium land last year.

The firm’s shareholder funds stood at €159 million. Its cash pile increased from €4.2 million to €4.7 million.

1 Provisional liquidator appointed to Dublin engineering firm
2 How can I view my dead brother’s will if I’m not the executor?
3 Kerry’s Chinese sales set for 30% hit from coronavirus
4 Bursting of Tesla bubble a case of ‘not if, but when’
5 Bank of Ireland staff in line for 2.95% pay increase
6 US reiterates opposition to Huawei equipment being used for Irish 5G
7 Finance Ireland plans stock market flotation in May
8 Must you pay a price for ethical investment?
9 Flutter’s planned merger with Stars gets informal approval in Australia
10 Irish Reits would benefit from property funds overhaul, Davy says
Real news has value SUBSCRIBE