Dark mysteries and dating advice from your parents: what to expect from Irish television

Take a trip to Darklands, the OAP B&B, Trinity or the Rotunda over the year ahead 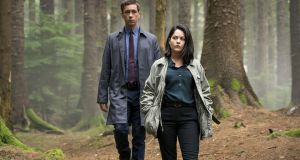 After a summer schedule of sport, repeats and the very popular Love Island, Irish broadcasters will embark on a fresh hunt for viewers again this autumn as they try to distract us from the never-ending content coming from international broadcasters and streamers.

RTÉ will be launching its new season of programming on August 22nd, with Virgin Media Television taking its turn on August 28th.

But what have the spate of funding announcements and casting calls revealed so far about what Irish-produced (or Irish co-produced) series we can expect to see over the next year (or so)? Here’s some of what’s coming up.

Based on the first two Dublin murder squad books (In the Woods and The Likeness) by bestselling author Tana French, Dublin Murders has been adapted for the screen by Sarah Phelps, best known for her re-imaginings of the Agatha Christie oeuvre. Killian Scott (Love/Hate, Ripper Street, Strike) and Sarah Greene (Rebellion, Rosie, Normal People) play the central detective duo in the eight-part series from the BBC, RTÉ and US network Starz. Readers of French’s books probably shouldn’t be too confident they already know how this “dark psychological mystery” will pan out - Phelps changed the story of Christie’s Ordeal by Innocence for her version and has played it loose with some others.

Gogglebox Ireland makers Kite Entertainment were out and about earlier this year casting OAP B&B, a six-part original format for Virgin Media Television. Kite, which also makes Ireland’s Fittest Family for RTÉ, describes OAP B&B as a “social experiment” partly inspired by the housing crisis. In this series, young people who can’t afford to live in cities owing to prohibitive rents move in with over-65s who have nice comfortable bedrooms to spare, the idea being that they pay their rent in the form of chores and company. At the end of a trial period, they decide whether or not they want to continue the arrangement beyond the life of the television show.

Expected air date: To be confirmed, Virgin Media One

Raised by the Village

After a pilot episode in 2018, Raised by the Village returns for a four-part series to tell the story of eight city families who need help with parenting and are taking “drastic steps” to get it, according to RTÉ. That’s right, they’re moving their “troublesome teens” to the countryside where they can be “raised by the village”. Under the guidance of child psychotherapist Stella O’Malley, the teens “will get a dose of teenage life, Irish village style”, but what will their behaviour be like after an agricultural intervention? The show is made for RTÉ by production company Waka TV and is actually the Irish version of an international format owned by Amsterdam-based Endemol Shine.

Darklands is a six-part crime drama that’s been in the pipeline for a while. Made by Parallel Films, it was approved for Broadcasting Authority of Ireland (BAI) Sound & Vision funding back in 2017, but was filming only recently - the producers put out a call for crowd scene extras earlier this month. The drama, created by Mark O’Connor (who directed and co-wrote the film Cardboard Gangsters), is set amid gang-warfare in Dublin’s inner city, the twist being that its 16-year-old lead character dreams of becoming a Mixed Martial Arts (MMA) fighter. If that doesn’t appeal, then the good news for fans of Sophie Petzal’s family mystery drama Blood is that the Adrian Dunbar-starring Virgin series, which attracted decent ratings on the UK’s Channel 5, will be back for a second run.

Expected air date: To be confirmed, Virgin Media One

Pulling with my Parents

Derry-based production company Alleycats sought “singletons who trust their parents enough to select their next date” for this series, which RTÉ has told potential sponsors is “a return to basics” that will see the generation that “did dating the old-fashioned way” try to “crack the cupid conundrum for their kids”. So in this six-part horror - sorry, factual - series, parents will “completely take over” the love lives of their children, “revamping” their social media profiles and offering “old-school solutions” to dating disasters, all while giving “blunt and honest advice” with the aim of lining them up a date. “Who knew a small ad in the Farmers Journal had such erotic potential!” enthuses RTÉ.

The observational series on Europe’s oldest maternity hospital returns for an eight-part run - its debut in 2018 was hailed by Irish Times television critic Peter Crawley as “life-affirming in its mingling of non-nonsense midwifery, a mother’s agonies of labour, the comic subplot of bewildered new fatherhood, and the smothering encouragement of overbearing families”, as well as sombre in its portrayal of a couple whose baby has a fatal heart defect. The series, which won the award for Best Factual Entertainment at the Celtic Media Festival, is made for RTÉ by Scratch Films and distributed internationally under the does-what-it-says title 24 Hour Baby Hospital.

Element Pictures is making this 12-part series of Sally Rooney’s delicate novel, directed by Lenny Abrahamson and Hettie Macdonald, for the BBC and Hulu - though surely an Irish broadcaster will have to pick it up. Paul Mescal, in his first television role, and English actor Daisy Edgar-Jones (Cold Feet) have been cast as young on-and-off couple Connell and Marianne, with Sarah Greene (35) as Connell’s mother Lorraine (she had him when she was young, okay). The series, which has been adapted by Rooney herself, Alice Birch and Mark O’Rowe, was filming recently around Trinity College in Dublin, with scenes also shot in Sligo and Italy. It is being billed by BBC Drama controller Piers Wenger as a “story of millennial angst”, which sounds about right.

1 Fianna Fáil may have just pressed the pause button on the property market
2 UK to prioritise EU trade deal over one with United States
3 Who are Ireland’s 17 billionaires?
4 Are there annual limits on inheritances or gifts to a child?
5 Eason puts Blanchardstown store on market at €16m
6 My father in a nursing home wants to gift me his house
7 State ranked highly for attracting skilled workers but low on gender equality
8 CVC must reveal Six Nations interest before Pro14 bid
9 London fintech company Nuroco to expand here
10 German fund pays €19.6m for Dublin 4 office block
Real news has value SUBSCRIBE