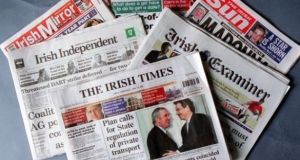 The ABC figures show the Irish newspaper market continued to contract in the first half of 2019.

The Irish Times had a combined average daily circulation of 79,021 copies for its print and epaper editions in the first half of this year, marginally down on the same period last year, according to the latest figures from the Audit Bureau of Circulations (ABC).

Surprisingly, the ABC data did not include circulation figures for the Irish Independent and its sister titles, the Sunday Independent, the Herald and the Sunday World.

Independent News & Media (INM) declined to comment on why it had not supplied ABC with its latest sales data. The group was recently acquired by Belgian media group Mediahuis for €146 million.

The figures show The Irish Times saw its print circulation decline by 6 per cent to 56,518 between January and June. However, sales of the digital edition or epaper increased by 19 per cent to 22,503 in the period, and now represent almost 29 per cent of average daily sales.

Commenting on the latest numbers, The Irish Times managing director Liam Kavanagh said: “These are excellent results in a difficult market and where the strength of The Irish Times brand in supporting quality and trusted content is clearly evident.”

He also noted that traffic to Irishtimes. com has grown consistently since the launch of the group’s paid content strategy, with monthly page impressions to the website and apps now exceeding 61 million, equating to 11.9 million users per month.

ABC figures for the Irish newspaper market as a whole showed it continued to contract in the first half of 2019, a trend that has been ongoing for more than a decade as people switch from print to digital.

The circulation of daily print titles – including UK newspapers sold in Ireland – fell by nearly 50 per cent to 232,410 copies sold on average each day.

However, this was largely down to the absence of INM titles in the headline data rather than falling sales.

The Irish Examiner, which is owned by The Irish Times, recorded a 6 per cent year-on-year decline in print circulation to 24,574 a day. Sales of its sister title, the Evening Echo, fell 6 per cent to 8,439 per day.

The Irish Sun, which had bucked the downward trend last year, saw its circulation fall 13 per cent to 49,163.

Sales in the Sunday market were down 58 per cent, with an average circulation of 333, 900 newspapers each week recorded during the period. Again, the figures were skewed by the absence of INM titles, which include the Sunday Independent and the Sunday World.

The Sunday Business Post saw its print circulation fall 10 per cent to 25,740 on the same period last year. However, sales of its epaper rose to 3,073, giving it a combined print and digital circulation of 28,813.

The Sunday Times had a circulation of 68,559 in the Republic, down 9 per cent on an annual basis.

“With 100 per cent of the Irish Farmers Journal’s circulation actively purchased, alongside a rapidly growing digital subscriber base, we decided that the ABC model was no longer aligned to our strategy of growing our paid circulation base,” Mr McCarthy said, noting the group had retained consultants KPMG to review its circulation sales, which were on average 62,226 in the second half of last year.

1 ‘The only time apartments were viable was in . . . Ballsbridge, Killiney and Dalkey’
2 Life as a Facebook moderator: ‘People are awful. This is what my job has taught me’
3 Suspicions rife as key Brexit trade talks begin in Brussels
4 Corona beer firm reeling after 8% slide due to coronavirus
5 Coronavirus: Wall Street joins global sell-off in worst week since 2008 crisis
6 Covid-19: Aer Lingus parent cuts capacity, unable to provide guidance
7 We have little chance of building enough homes to meet election promises
8 Has CRH done enough to silence pesky Swedish activists?
9 Why Irish banks are now looking beyond vulture funds on problem loans
10 How well paid do you think you are? Here’s how to work it out
Real news has value SUBSCRIBE