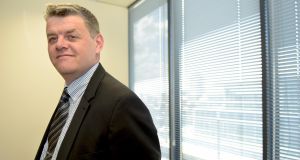 Independent News & Media (INM) chief executive Robert Pitt. INM has been asked by the ODCE to produce records in relation to the abandoned plan to buy Newstalk.

Independent News & Media (INM) has been asked by Ireland’s corporate watchdog to produce records in relation to an abandoned plan to acquire Newstalk.

INM said it was “taking all necessary steps” to meet the requirements of the Office of Director of Corporate Enforcement (ODCE), which had asked for records “in relation to the possible acquisition by the company of Newstalk and related matters.”

Mr Pitt and Mr Buckley disagreed on the price that INM should offer for Newstalk, which is part of Communicorp, the radio group owned by INM’s largest shareholder Denis O’Brien.

INM made an unusual public statement in November that an “issue” had arisen between Mr Pitt and Mr Buckley, a business associate of Mr O’Brien, in relation to a possible acquisition.

It is understood Mr Pitt wanted to offer a lower price for the national radio station than a valuation obtained by Communicorp. Mr Pitt had received a separate and significantly lower valuation on what the asset was worth.

Discussions about a possible acquisition ended at a preliminary stage, the company said at the time.

The ODCE has the power to request documents from a company in certain circumstances, as part of a fact-finding exercise. It is not known what prompted the ODCE action.

“A requirement from the ODCE to produce books and records is a procedural matter that does not involve any conclusion that there has been a breach of law by the company or its officers,” INM said.

INM said it had established a formal independent review of the matter in December, before being contacted by the ODCE. This review is confidential, INM said, and is being carried out on behalf of the board by senior counsel and a senior independent governance expert, who will report to the board of INM.

“The company takes its corporate governance responsibilities very seriously, and seeks to comply at all times with all relevant laws and regulations,” it said.

INM added that it did not intend to comment further on the ODCE’s intervention or the formal review.

The publisher of the Irish Independent, Sunday Independent and other titles increased its pre-tax profits by almost 12 per cent to €41.8 million in 2016. Profits increased largely as a result of lower costs, with the company’s pre-distribution operating expenses dropping 9 per cent.

Contract printing income also declined following the closure of INM’s printing operation in Belfast, a move that contributed to the company’s lower costs.

Total revenue nudged up 0.7 per cent to €323.4 million, as the decline in its core newspaper advertising and circulation revenues was offset by a €2.6 million bump in digital income and, in particular, by higher revenues from distribution and commercial printing activities. These rose almost 10 per cent to €148.6 million.

Online revenues increased 20 per cent to €15.1 million, with this part of the business was boosted by the company’s May 2016 purchase of the 50 per cent of classifieds site CarsIreland.ie that it did not already own.

INM highlighted the “current slowdown in digital display advertising” in its outlook statement. News publishers have not benefited from the global surge in digital advertising, which has been driven by Google and Facebook.

The company said its digital revenues were in the process of becoming less dependent on display advertising as it grows its income from native advertising (online “advertorial”), audience targeting and commercial partnerships.

The company’s cash pile now sits at almost €85 million, after it added €25.1 million to its net cash position during 2016.

It has repeatedly signalled its intentions to acquire other media companies, but to date the largest of these has been its proposal to buy regional newspaper group Celtic Media. Minister for Communications Denis Naughten is expected to make a decision on whether to approve this deal in June.

The group said it was in “an ongoing process of discussion” with the trustees of two of its defined benefit pension schemes, following its announcement in November that it is to wind-up the schemes.

Hundreds of former and current employees of INM may see cuts of about 30 per cent to their pension entitlements as a result, on top of cuts of about 40 per cent implemented in 2013.

A group of those affected by the deep cuts protested at INM’s extraordinary general meeting in December, while the move was described as “a new low in corporate behaviour” by Irish Congress of Trade Unions general secretary Patricia King.

INM recorded a credit of €11.8 million on its balance sheet in 2016 after it “derecognised” its obligations to make contributions to the pension schemes.

Mr Pitt, who remains chief executive despite the disagreement with Mr Buckley, said the full-year results represented “a strong profit performance” in light of “negative industry conditions”, as well as uncertainty relating to Brexit and other international events.

“In light of the aforementioned very challenging industry conditions, the group does need to address the structure of its pension obligations,” he said.

1 Ireland has fifth-largest number of billionaires per capita in the world, says Oxfam
2 Irish rents see second-highest increase in the EU since 2007
3 Boeing’s 737 Max will fly again in 2020, Avolon predicts
4 Chris Johns: Ireland risks populist culture war over property and pensions
5 State-backed Finance Ireland weighs stock market flotation in 2020
6 PTSB finance and operations executives vie for chief executive job
7 Companies should not use the climate crisis as a scapegoat
8 Ireland ranked second in Europe for data breach notifications
9 ‘The only time I saved money was some coins in my first piggy bank’
10 Irish billionaires, Hogan goes to Davos, PTSB’s CEO race and Ibec’s election wishlist
Real news has value SUBSCRIBE