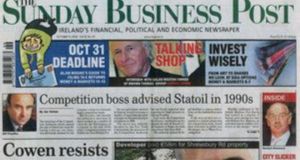 Staff at the Sunday Business Post have been told that they are “most unlikely” to receive a payout for their minority stake in the business, following the recent sale of the newspaper by Key Capital to Enda O’Coineen’s Kilcullen Kapital.

Conor Killeen, the chairman of Key Capital, wrote to worker-shareholders on Friday to address the issue. He is also the chairman of Sunrise Media, the SBP’s parent company in which the newspaper’s staff hold a stake. Sunrise is selling the newspaper, but will retain the associated Webprint printing business.

“Some of you have been enquiring if there is likely to be any payout for the shares you own in Sunrise Media (held on trust for you by Post Publications Nominees) following the sale of Post Publications Limited (owner of the SBP) which we have agreed to sell to Kilcullen Kapital Partners,” wrote Mr Killeen.

Documents filed in the Companies Registration Office suggest that Post Publications Nominees owns a stake in Sunrise of about 14 per cent, although it is unclear if all of this is accounted for by the SBP’s staff.

“The short answer is that a payout is most unlikely, because Sunrise Media has made substantial loans to Post Publications Limited over the past number of years,” continued Mr Killeen.

Accounts for 2017 for Sunrise, which were filed in the CRO last month, state that at the end of last year, the newspaper owed its parent group more than €1.4 million.

The deal with Kilcullen is expected to close at the end of next month, following rubber stamping by the State, which must give its imprimatur for the sale of all privately-owned media assets. Mr Killeen told SBP staff a meeting would be held once the deal closes to “run through the financial position” of Sunrise.

He suggested if the Webprint business “were to do well over the next number of years there may be a distribution for shareholders once Sunrise has repaid loans”. Sunrise owes about €2.4 million to entities associated with Key Capital.

Upon agreement of the deal, Mr O’Coineen, a serial investor who also founded Afloat magazine, said last week he plans to grow the Post’s print and digital offering. It will be his first foray into the national newspaper market.

Bombardier to sell aerostructures business to US company for $275m 16:52
Death of Samsung chairman sparks hopes for shake-up 13:29
Oxford Covid vaccine trials offer hope for elderly 12:57
How much state pension will I get next year? 12:50
Ulster Bank to introduce new card payment controls on app 11:46
Search executive
jobs on irishtimes.com