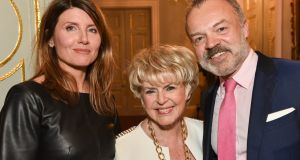 Irish television talent, including Graham Norton, Sharon Horgan and Eamonn Holmes, joined executives from RTÉ, TV3, the BBC and other media groups at a broadcasting industry gathering in London on Thursday night.

Guests at the bash honoured the contribution to broadcasting of Gloria Hunniford, the Portadown-born presenter who has been a fixture on television since the 1970s. Ms Hunniford currently cohosts the BBC One consumer affairs show Rip Off Britain and appears as a panellist on ITV’s Loose Women.

The event at the Irish Embassy was also designed to connect executives, producers and front-of-camera talent based in Ireland with Irish people or people with strong links to Ireland who work in senior or high-profile roles in the UK industry.

The gathering was organised by Lesley O’Connor, a former RTÉ producer and former Web Summit executive producer, and Stephen McCormack of Straywave Media.

Ms O’Connor and Mr McCormack are cofounders of Mediacon, a two-day industry summit held in Dublin that returns for the third year in May.

The idea behind Mediacon and events such as the London gathering is to promote new links between Ireland and executives, commissioners and producers in other countries, in recognition of the increasingly global nature of the television industry.

Mediacon will host a similar gathering in Los Angeles in September for US-based talent and executives with links to Ireland. It also plans to host a summit in the Canadian television production hotbed of Vancouver.