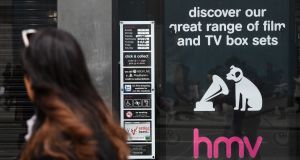 Sunrise Records is to pay more than £300,000 a week until July for the right to occupy HMV’s stores and its London headquarters. Photograph: Kirsty O’Connor/PA Wire

Sunrise Records paid a total of £883,000 (€960,000) to acquire the business and assets of HMV, which entered administration with obligations to trade creditors of more than £53 million, documents show.

The first statutory report prepared by KPMG, which was appointed administrator to the entertainment retailer in December, showed that most of the Sunrise consideration was for stock and cash in the business. The other assets were largely transferred for a nominal sum.

Sunrise will pay more than £300,000 a week until July for the right to occupy HMV’s stores and its London headquarters.

Ontario-based Sunrise acquired the business with a view to increasing its exposure to music on vinyl, a format that has enjoyed an unlikely renaissance. It has since reopened seven of the 27 stores that were closed when the sale was concluded.

“We are still negotiating with those landlords who want to negotiate, and where it makes sense to reopen stores that’s what we’ll do,” said Sunrise chief executive Doug Putman.

“Our first goal is to get product back into the stores. I’d say we are 75 per cent of the way there with that.”

KPMG’s report further stated that two conditional offers for the business and assets were received by mid-January – one of which was from Mike Ashley’s Sports Direct group – plus a proposal from the company’s existing management team.

Formal sale documentation was issued to two of these three parties, neither of whom was able to proceed. The proposal from Sunrise was only received at the end of January and moved quickly to completion.

The report stated that secured creditors would face a shortfall of about £25 million on their overall debts.

The secured creditors include PNC, a US asset-backed finance specialist, and two vehicles controlled by HMV’s former owner Hilco. In the year to December 2017, the last for which accounts are published, HMV paid £7 million to entities owned by Hilco for property, procurement and licensing services.

The directors of HMV indicated to the administrators that trading was in line with budget until the middle of November, but worsened over Christmas and that the company would have breached its banking covenants by the end of December.

This was despite £4.2 million of cash and guarantees from Hilco, which had already deferred some financing obligations. The US firm originally acquired HMV out of administration in 2013. – Copyright The Financial Times Limited 2019