Big reputations: Why firms have to work harder to woo doubtful ‘fence-sitters’

A reputation expert explains how Netflix and Uber have improved theirs, while Facebook’s and Google’s have slid 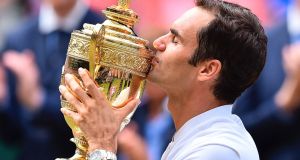 Why is Rolex judged to be the most reputable company in the world? “It sort of has a higher purpose,” says Stephen Hahn-Griffiths, chief reputation officer at the New York-based Reputation Institute. “It is trying to be successful, but with a sense of nobility.”

Hahn-Griffiths says the luxury watchmaker’s number one position in the 2019 Global RepTrak 100 study may cause a raised eyebrow or two, but he believes Rolex has told its corporate backstory well. It is helped, also, by its “very smart” choice of ambassadors – including 20-time Grand Slam tennis champion Roger Federer, the epitome of somebody who wins, but “does it in the right way”.

Hahn-Griffiths was speaking ahead of next Friday’s publication of the annual Ireland RepTrak study for 2019 by the Reputations Agency, which partners with the Reputation Institute on its ranking of how the Irish public perceives the images of top companies. Last year’s list, based on a large-scale survey, was topped by credit unions, followed by Kellogg’s, Aldi, Bord Bia and Boots.

Companies need to pay greater attention than ever to their reputations in the increasingly active and sceptical court of public opinion, he says.

In 2018, corporate reputations went into decline for the first time since the financial crisis, and while there was some recovery in 2019, there wasn’t much bounceback on key measures of reputation such as “benefit of the doubt” and willingness to recommend a company to a friend.

If it doesn’t deal with gender inequality, we’re going to see a continued erosion of its reputation

This means companies have to work harder than ever to win over the majority of consumers who are classed as “fence-sitters”, says Hahn-Griffiths.

“Cynical may be too strong a word, but they are certainly doubtful.”

Although it still has a good reputation overall, Google slid out of the top 10 in this global RepTrak 100, having come third the year before, as cracks emerged in its “do no evil” motto of old.

Hahn-Griffiths cites last year’s Google+ data leak, but draws particular attention to ongoing gender inequality issues in its workforce. The heat Google attracts on this subject partly arises from its size, as it is “carrying the can” for the behaviour of the rest of the tech industry, he says. But this only makes it even more of an imperative for its leadership to “get ahead of it”.

“If it doesn’t deal with gender inequality, we’re going to see a continued erosion of its reputation.”

By contrast, Netflix rocketed up the rankings this year to ninth place in the global study and first place in a separate US analysis. The Reputation Institute attributes this to its decisiveness in cutting ties with Kevin Spacey, star of its original commission House of Cards, in the wake of sexual assault allegations against him.

“Within hours, it made a conscious decision to put ethics and morality first,” says Hahn-Griffiths.

Facebook, unsurprisingly, has been in freefall. “Facebook is in the penalty box of reputation globally,” is how he puts it.

The companies who the general public forgive are the ones with which they have a deeper connection. If you’re inhuman, you’re already half-guilty in the court of public opinion

The “defensive mode” displayed by chief executive Mark Zuckerberg at Congress in the wake of the Cambridge Analytica scandal was a recipe for how to “get yourself into a reputational pickle”, he notes, and questions of business viability arose as a result. But the situation is “not irretrievable” for either Facebook or Zuckerberg.

Microsoft came fifth in this year’s global RepTrak 100, bucking the trend for the tech industry by climbing five spots. Meanwhile, its co-founder Bill Gates is a father-figure widely hailed for his philanthropy.

“Perhaps Zuckerberg should look to Gates and ask himself how did he turn it around?” suggests Hahn-Griffiths.

Using the figurehead of the chief executive to their advantage is one of the key tactics all companies should use. A good example comes courtesy of Uber, which he says has managed to erase some of its reputational tarnish thanks to the leadership of Dara Khosrowshahi, chief executive since 2017.

“Being human” also goes a long way in a world of technology and automation.

“The reality is that a crisis can happen to every company. The companies who the general public forgive are the ones with which they have a deeper connection. If you’re inhuman, you’re already half-guilty in the court of public opinion.”

1 Irish company paid €1.2m a year by collapsed Blumenthal-linked Australian restaurant
2 Hugo MacNeill steps back from Goldman Sachs role
3 Why bosses should not be afraid of speaking out on Instagram
4 Should AIB compensate me for upsetting letter on arrears?
5 Irish economy to grow by 3.4% this year, predicts EY
6 ‘I wouldn’t be a big saver. I tend to buy now and repent at leisure!’
7 ‘Germans are very efficient and reliable. Cancelling is alien to them’
8 Greencoat Renewables buys Clare wind farm for €35.4m
9 Chris Johns: The Johnson administration will spend, and needs a quiet Treasury
10 Tax shifts won’t drive multinationals out of Ireland - Moody’s
Real news has value SUBSCRIBE

Setback for Tullow Oil as it plugs a well off the coast of Peru 08:57
Greencoat Renewables buys Clare wind farm for €35.4m 07:12
Legal eagles yet to land; economy to grow 3.4% this year; and CEOs on social media 06:34
‘I wouldn’t be a big saver. I tend to buy now and repent at leisure!’ 05:20
Irish company paid €1.2m a year by collapsed Blumenthal-linked Australian restaurant 03:45
Search executive
jobs on irishtimes.com