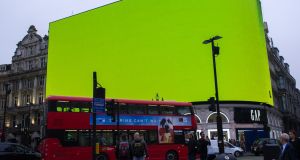 How do out-of-home advertisers lure our eyes to their posters, panels and billboards? In the age of mobile addiction, the answer is with difficulty.

“With Irish phone users picking up their handsets 55 times every day, out-of-home campaigns must contend with a face-down culture among pedestrians and public transport users,” wrote marketing group Core in its recent outlook report for the media market in 2019.

Obvious as it now sounds, I hadn’t really thought too hard about this cause-and-effect before, being more consumed by my own daily battles with people who wade blindly down narrow and crowded streets attached to special eye-magnet phones in the confident expectation that you will be the one that makes way for them, no matter how unpredictable their path.

But because everybody is the thing they hate, there have also been the occasions when I’ve caught myself acting the full-blown “smombie”. Sometimes the world inside my phone just sparks more joy than whatever dreary, refuse-filled corner of the city I’m stuck in for the thousandth time that week, and dipping into it is totally worth the looks of derision from suffering co-pedestrians.

This in theory makes me more susceptible to the ads for weird joint pain fixes that infiltrate my apps of choice, while reducing my exposure to the messages put out by those beverage, confectionery, fast food, entertainment, financial and utility companies that are more than averagely fond of out-of-home campaigns – not forgetting the vegan industry, of course.

The other reason to overlook the drag that mobile culture can have on out-of-home ad awareness is that it wasn’t supposed to be this way.

Smartphones were meant to usher in an era of great engagement with out-of-home advertising. But invitations to, say, scan QR codes to access discount offers or competitions still feel like peripheral gimmicks, while more sophisticated ambitions, ones that use screens capable of basic facial recognition – advertisers looking at us, rather than us looking at them – run up against all manner of privacy rights and regulations.

The good/bad news is that this is probably just an awkward in-between phase. Technology and out-of-home advertising will almost certainly end up in a joyful marriage, one capable of distracting us from our extended phone obsessions.

In Japan, where the future hangs out, Sony has been busy making a giant 63ft by 17ft screen with 16k resolution. Sony didn’t manufacture this mega-display – it is longer than a bus and stretches between two floors of a building – just for kicks, but as a research-centre installation for Japanese cosmetics group Shiseido. The screen’s special trick is to be so replete with pixels that passers-by can stand right next to the unit without the image looking blurred.

It’s not hard to see the potential, even of 8k, for out-of-home advertisers – indeed, it’s all too easy.

Closer to home, the famous illuminated signage at London’s Piccadilly Circus, which dates back to 1908, went “dark” for nine months in 2017, during which time its patchwork of six digital screens were replaced with a single ultra-high definition curved screen – the largest of its kind in Europe.

Far beyond such landmarks, advertisers and agencies want digital options. Here, in the Republic, digital screens accounted for 10 per cent of total out-of-home panels last year, but 20 per cent of the revenue. Out-of-home contract holders like JCDecaux and Exterion are steadily upgrading old paste-and-paper poster sites to 4K screens, while digital ad panels (aka Digipanels) are moving beyond shopping centres and transport hubs to Dublin streets.

New and converted digital ad inventory is driving growth in the Republic’s €83 million out-of-home market. However, Irish cities are still way behind counterparts in Europe when it comes to digital advertising infrastructure.

Outside the industry, some people will agree that pin-sharp digital panels, which can be used by public authorities as well as companies with photographic burgers to flog, are part of the expected fabric of a city. Others will instinctively be resistant to any kind of commercial clutter, from large screens to branded street furniture, and wary of exercises that promote consumerism through digital wallpaper.

The middle ground is to acknowledge that the newer ad infrastructure is not only more flexible and effective for advertisers, but it represents an aesthetic improvement for everybody – as long as it means that tatty billboards and those grim, peeling posters that adorn construction hoardings are banished to the same resting place as vintage ads for Bovril and Bile Beans.

Context is everything: the placement and usage of digital ad panels is already subject to architectural sensitivities and, more importantly, roadside safety. Jokes about a rebuilt Notre Dame resembling a giant shrine to luxury brands following multimillion donations from LVMH, L’Oréal and the company behind Gucci are just that.

The “creative challenge” for out-of-home ads, as Core puts it, is to adapt to digital while finding ways – good ways – to surprise the public.

It wasn’t quite viral material, nor did it reside at any technological or conceptual cutting edge, but the out-of-home ad that most startled me from the upper deck of Dublin Bus so far in 2019 – so much that I took a note of the agency responsible (BBDO Dublin) – was a painterly execution of Galaxy’s Choose Pleasure campaign.

I don’t know what attracted me to the giant billboard image of a woman’s commuting drudgery being reinvented as a Renaissance painting dramatically glowing with chocolate-related rapture, but it did make me look up from my phone for a second glance.