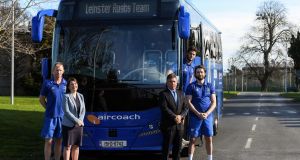 Aircoach has extended its deal as official coach supplier to Leinster Rugby, with the private bus and coach operator unveiling a branded bus to mark the partnership at the club’s headquarters in UCD on Monday. The company and club began their association in 2015.

The deal comes as the transport company is investing more than €4.5 million over the course of 2018 and 2019 in new coaches and technology upgrades. It now has a fleet of 69 buses and coaches.

Aircoach managing director Dervla McKay said the company looked forward to working with Leinster Rugby over the coming years, while Leinster Rugby chief executive Mick Dawson also welcomed the extension of the partnership, the terms of which were not disclosed.

The club’s title partner is Bank of Ireland, while its “premium partners” are Adidas, Laya Healthcare, Lifestyle Sports, Bearing Point, Guinness and Energia, among others.

1 Chris Johns: Past is another country when it comes to our post-pandemic future
2 Citigroup warns that markets are out of step with reality
3 US ‘hard seltzer’ drink White Claw launches in Ireland
4 ‘I’m so lucky to be in the Caribbean – a million miles from Derry Girls’
5 Michael Smurfit: ‘I asked Trump to invite me to the White House for my 80th birthday’
6 Minister calls on EU to act against tobacco firms ‘undermining’ menthol ban in Ireland
7 Small businesses are cannon fodder in zealous anti-virus experiment
8 ‘The recovery needs to be a full-scale economic renewal’
9 Lioncor gets planning permission for ‘house of Europe’ project
10 Household savings soar as consumers stop spending
Real news has value SUBSCRIBE