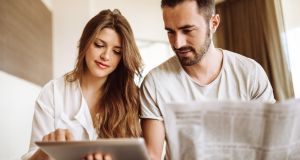 Some 59 per cent said Irish media helped them understand the news of the day, which was well above the EU average of 48 per cent

More than a quarter of Irish news consumers decided not to share a news story in the last year because they doubted its accuracy, according to a digital news report published today by the Reuters Institute for the Study of Journalism.

Some 61 per cent of Irish news consumers said they were concerned about what news was real and what was fake on the internet. This proportion nudged up from 57 per cent in the previous year and came in higher than the European Union average of 51 per cent.

The Irish element of the study, compiled by Dublin City University’s Institute for Future Media and Journalism (FuJo), offered a mixed picture of Irish people’s relationship with news.

More than a fifth of the 2,013 Irish people surveyed said they had stopped using certain news sources because they were unsure about their accuracy.

On a more positive note, some 59 per cent said Irish media helped them understand the news of the day. That was well above the EU average of 48 per cent.

A quarter of Irish respondents agreed with the statement that they were “worn out by the amount of news there is these days”.

The global report revealed little traction in the willingness of news consumers to pay for digital news through subscriptions, donations or once-off payments.

The rate at which respondents paid for digital news stayed flat at 11 per cent in the EU. In the Republic, it rose 1 percentage point since the previous study to 12 per cent.

The 25-34 age group was found to be the most likely to pay for online news, with 19 per cent indicating that they did so, compared to only 7 per cent for 55-64 year olds.

“While there is a very slow increase in the numbers of Irish people willing to pay for news online, overall Irish people’s interest in news remains consistently high and their questioning of the veracity of news sources is encouraging,” said FuJo director Jane Suiter.

“In this turbulent time, news providers must continue to champion the idea that quality online news is a necessity, rather than a luxury,” Dr Suiter said.

The report notes it will be “interesting to see” if the arrival of Belgian group Mediahuis, which is in the process of acquiring Independent News & Media, will trigger a rise in this figure.

Respondents were asked what type of media subscription they would pick if they could only have one. More chose a video streaming service such as Netflix or Amazon, a premium sports channel or a music streamer than a paid-for online news product.

Research for the Reuters Institute study, which covers 38 countries, was conducted in January and February by polling company YouGov using an online questionnaire. People who didn’t consume news in the previous month were filtered out.

While Facebook remained the most important social network for news among Irish news consumers, closed networks such as WhatsApp and Facebook Messenger were found to be surging in popularity for sharing or discussing news in other parts of the world.

In the Republic, 15 per cent of news consumers said they used WhatsApp for news on a weekly basis. This was higher than the EU average, though far lower than usage in countries such as Brazil, Malaysia and South Africa.

The most common “first source of news” in the morning for Irish respondents, cited by 33 per cent, was radio, though this was down 6 percentage points since the question was last asked in 2016.

The internet via smartphones increased 10 points over three years to 31 per cent, while there was no change for television, cited by 16 per cent, or printed newspapers, the answer given by 4 per cent.

The internet through tablets or laptops was also at 4 per cent, while just 1 per cent said they used smart speakers as their first source of news.

“The rapid pace at which technology continues to change the media landscape around the world presents particular challenges to those charged with ensuring that the regulatory environment remains appropriate,” said Michael O’Keeffe, chief executive of the Broadcasting Authority of Ireland, which funded the Irish part of the report.

Mr O’Keeffe added that it was “heartening” that radio was still the first source of news for Irish people in the morning.

1 Can Big Tech’s backing install Biden in the White House?
2 Revenue accused of harassing businesses over Covid wage subsidy scheme
3 Grafton Street landlord cuts high street property values by 26%
4 Johnny Ronan loses out on €315m Dublin docklands deal
5 Give your home a smart makeover with some clever appliances
6 Social media accused of abusing power ahead of US election
7 How long can Government afford to keep State pension age at 66?
8 PTSB’s €1.4bn sale is a sign it is preparing for a fresh loans crisis
9 Providing smart solutions for ‘often misunderstood’ palliative care
10 Apple iPhone 12 Pro: Well worth the wait
Real news has value SUBSCRIBE