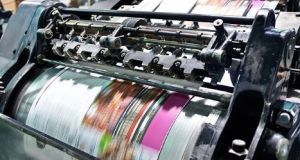 “Few industry people would place bets on this trio of quietly miserable blows to Irish journalism being the last this year.” File photograph: iStockPhoto

It has been an ugly first half to 2019 for the employment of journalists. News that the best part of 20 jobs will disappear at the Times Ireland follows cutbacks at Independent News & Media (INM) and DMG Media Ireland (publisher of the Daily Mail) that have seen more than 30 people depart each organisation.

While it had been rumoured that the Times Ireland would stop selling its print edition this summer after two years on the shelves, the extent of the compulsory redundancies at the Dublin office of News Corp UK & Ireland was comprehensive and unexpected.

It had only recently been in hiring mode. And when it began as a digital-only subscription product in 2015, it did so with a higher quantity of staff than the three roles that will remain now – kept, it seems, to feed news into the general Times digital product rather than cater directly for Irish subscribers. The resource-consuming investigations that gave the Times Ireland its journalistic reputation appear to have been thrown out the window by London.

Few industry people would place bets on this trio of quietly miserable blows to Irish journalism being the last this year.

Redundancies at DMG Media Ireland, a mix of the voluntary and “sorry, your job no longer exists” variety, were focused on the Irish Daily Mail rather than its cheaper-to-run digital offshoots Extra.ie and Evoke.ie. DMG has not indicated any plans to stop printing the Irish title, which only launched in 2006, but few would be surprised if either it or other British-owned newspapers were to withdraw.

The existence of these editions has long been regarded as a head-office wheeze to use sales in the Republic to bolster circulation totals. If there is no other commercial imperative for being here, then the logic of this strategy will inevitably falter after 12 years of a declining print market.

Even titles born in the digital era, like the Times Ireland, evidently struggle to build the bases required to justify their costs

INM, the biggest newspaper publisher in the State, is a profitable enterprise, though it has hardly seemed like the most secure one of late. Its redundancies so far this year, not all of them editorial, were said to be voluntary, though the National Union of Journalists (NUJ) reported “growing anger at the imposition of job losses under the guise of a voluntary process” and said it was “difficult to conceive of further reductions”.

As INM is about to be taken over by Belgian group Mediahuis, it is likely that there will be more cuts, however. Mediahuis has already flagged that “making the print operations more efficient will make room for the necessary digital acceleration”, leading to “headcount reductions in specific functions”.

With any luck, there will be headcount expansions in others. But while the advent of Mediahuis can be regarded as a positive for INM at corporate level – one with the potential to inject expertise on the critical subject of how to run a digital media business – a new owner doesn’t by itself herald glorious prospects for Irish journalism.

The same problem facing every news organisation remains. News groups currently earn much less from their digital products than they do – or did – from print ones.

Even titles born in the digital era, like the Times Ireland, evidently struggle to build the bases required to justify their costs. When subscriber offers such as complimentary iPads and Nespresso machines or the low price of €5 a month were not enough to sustain a title backed by the might of Rupert Murdoch’s News Corp UK & Ireland, it doesn’t point to a massive pool of willing customers for any new outlet.

Well, why did they ever buy newspapers? One basic reason too often forgotten is that lots of people once had nothing else to read on their breaks. Now those breaks have been supplanted by 10 minutes in the sandwich queue and all the diversions and novelties required are available, for free, in our pockets while we wait. Every single copy and subscription sold has to beat this.

It wasn’t always about the news for everybody anyway. In better times, journalists would acknowledge this by joking about how the crossword setters were the true stars of their title.

Last month Warren Buffett, one-time paper boy, suggested readers had moved on from newspapers because there were no ads for jobs, apartments and bargains in them anymore, adding that “it upsets the people in the newsroom to talk that way”, but the ads had been “the most important editorial content from the standpoint of the reader”.

Buffett also declared most US newspapers “toast”, which is unfortunate for him as he owns dozens of them.

Neither the successes nor the failures of the American market directly translate to this one, but a little flavour of this worst-case-scenario perspective might be useful, if only to temper the idea that just because journalists believe people should pay for news, enough of them will.

Journalism has become a career you hear journalists fervently swear they will prevent their kids from ever pursuing. Regardless of how industry-friendly the billionaires are feeling this week, this is grim.

1 Lahinch Golf Club runs out of its own cash after €3m Covid-19 hit
2 Fiona Reddan: Who’s afraid of Revolut? Not AIB and BOI it seems
3 Son putting elderly dad under pressure to sign over land
4 Reopening businesses can claim ‘restart week’ payment
5 How to gift your child a house deposit . . . tax free
6 France demands digital tax payments from US tech groups
7 BOI customers to be charged twice with bank fees on New Year’s Eve
8 Irish designer of Oxford vaccine: ‘I’ve never worked so hard in my life’
9 UK executives rush to sell shares over capital gains tax fears
10 Must I pay tax on sale of inherited apartment in Baltics?
Real news has value SUBSCRIBE