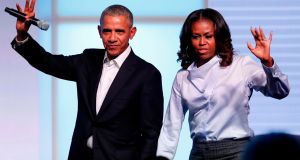 Drop the mic: Spotify has signed up the most sought-after couple in the media industry today. Barack and Michelle Obama, who already have an agreement to make content for Netflix through their production company Higher Ground, are now set to bring podcasts to Spotify – or, in journalese, they have “inked” an exclusive deal with the Swedish audio streaming service.

The Swedish what? Regular Spotify-watchers and indeed listeners will know that the company describes itself as an “audio first” platform, rather than merely a music one. When the streamer filed to go public last year, it made clear to investors that it saw podcasts as a potential path to growth.

“Music has just been the beginning,” chief executive Daniel Ek said in Spotify’s filing to the Securities and Exchange Commission (SEC). “We’re an audio first platform – as a top provider of podcasts, we’re also connecting audiences to the conversations that we think will shape the future.”

Sceptics might argue that whatever shaping these Obama-produced conversations lend to the future, it’s unlikely to be quite as defining as their past impact. But in a cluttered podcast universe, there’s little doubt that the former US president and first lady are odds-on to bring the magic touch that helps Spotify’s offering stand out from the noise.

Frankly, the Obamas could exert some supernatural authority and take over every channel, station, home page and platform on the planet and it would most likely lead to an improvement in the public mood.

From Spotify’s perspective, this is a high-profile salvo in an inter-platform podcast war. Once, every podcast that lived up to its own jingle was pretty much available on all podcast apps. This convenience is now somewhat tediously being unwound, with a proliferating number of platforms desperately trumpeting audio “exclusives” in a bid to capture our ears. It’s an ear-grab.

Irish media consumers will have already glimpsed this more fractured universe if their interest was successfully sparked by West Cork, the podcast about the murder of Sophie Toscan du Plantier. As West Cork was made by Amazon’s audiobook company Audible, it wasn’t available on podcast apps such as the market-leading (and iPhone pre-loaded) Apple one.

Anybody who wanted to hear West Cork had to sign up to Audible and complete the “Audible Original” within the month-long free trial period if they wanted to avoid paying a subscription fee. Thanks to moves by Spotify and others, the audioverse can be expected to increasingly work like this. Yes, there’s a podcast boom out there, but not every hyped pod will come for free.

Spotify, which already has more than 100 million paid subscribers and another 117 million in non-paying users, is spending hundreds of millions on this future. In February, it agreed to buy podcast start-ups Gimlet and Anchor, then in March, it added true and scripted crime specialists Parcast, billed as a “premier storytelling-driven podcast studio” with a 75 per cent female audience.

In its bid to diversify from low-margin music streaming, Spotify intends to splash up to $500 million (€442 million) on podcast acquisitions.

Little is known yet about what the Obamas’ Higher Ground Audio will contribute, but the couple are expected to “develop, produce and lend their voices” to “select podcasts”. Wouldn’t Obamapod have a nice ring to it?

Michelle Obama has promised to “amplify voices that are too often ignored or silenced altogether”, while her husband says podcasts offer “an extraordinary opportunity to foster productive dialogue, make people smile and make people think, and, hopefully, bring us all a little closer together”.

Other time-honoured reasons for pressing play – insomnia, commuting boredom, someone you know has done one – were presumably next on his list.

According to London-based research company Ovum, global monthly podcast listenership is on track for an explosion, from about 287 million people in 2016 to to 1.85 billion in 2023. These numbers are very topline – a person only has to listen to one podcast a month to be included.

Spotify’s bets on the podcast market may be as much influenced by the fact that its earnings have to come from somewhere. Thanks to the royalty payments it has to make for the pleasure and privilege of hosting all that music, it has only once made a quarterly profit.

But though the tech giants that win the smart speaker race may ultimately gain the edge in podcast distribution, Spotify’s existing user base still puts it in a decent position to deliver on its own techspeak and “enhance the podcast user experience with a better product that is focused on discovery”.

A product “focused on discovery” means only one thing: its podcast algorithm is coming.

Personally, I am oversubscribed and won’t be accepting any new podcast recommendations at this time. That new Marina album won’t listen to itself.

Still, I’ve learned over the years not to underestimate Spotify, and as for the ex-occupants of the White House – who really deserved a third term in retrospect – soon they’ll be the go-to answer to that head-scratcher of a question: does anybody actually make money out of podcasts anyway?