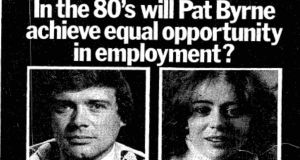 A 1980 advertisement for the Employment Equality Agency, set up in 1977 and led by the late Sylvia Meehan. Before then, it was legal for employers to bar women or men from jobs.

The 1970s were a decade of open sexism – you don’t have to have lived through it to know that. But delving back through The Irish Times archive recently, the job ads alone were enough to serve up some stomach-churning reminders.

There was no need back then to keep any kind of lookout for rampant sex discrimination. It bludgeoned you in the face and then guffawed creepily for some time after.

There’s the advertising agency requiring “a talented, imaginative young man . . . who feels he has already reached the top”, the music label seeking a “man with initiative” for the, ahem, “exciting world of gramophone records”, or the provincial newspaper calling for a “young energetic man of drive” to be their next senior reporter.

Any takers for the professional body after a “top-grade lady secretary”, the retailer’s secretarial position “ideal for a highly-qualified girl” or the utility company searching for “female clerks”?

For its part, the editorial content regularly offered patronising bemusement at the widening of some occupations to women for the first time. In a 1970 report artfully headlined “Women as traffic wardens”, the first of Dublin’s female traffic wardens are about to hit the streets: “Corporation officials would not commit themselves to descriptions of the girls except to say that they are in their early 20s, good-looking and that one comes from Dublin, another from the country and the third is English-born.”

Luckily for the ladies, everything changed forevermore on July 1st, 1977, with the advent of the Employment Equality Act. From then on, jobs had to be open to men and women, and advertised as such. The only exceptions were in acting, modelling and the church.

All three Dublin daily newspapers broke the law on that first day courtesy of an advertisement for “cameramen” for RTÉ that failed to state that women could be cameramen too. RTÉ hastily clarified that the position was open to women – and if they were to be prosecuted, “they looked forward to meeting The Irish Times in the dock”.

Aer Lingus, which was in the habit of advertising for “hostesses” who hadn’t yet reached the ancient age of 27, tried to retain their women-only cabin crew policy, miserably alleging that this was part of its image as “the friendly airline”.

As a result, the never-knowingly-overfunded Employment Equality Agency’s first use of its full powers of formal investigation was not to challenge a male bastion, but a female one.

The airline, then State-owned, was duly found to have engaged in unlawful sex discrimination and, in 1978, it advertised for both male and female cabin crew – 27-year-olds had to wait a little longer for their chance.

After 1977, The Irish Times appointments section assured that “all vacancies advertised in these columns are open to male and female applicants”. But 1977, women will be stunned to learn, was not the end of sex discrimination in hiring, only the beginning of a more covert era.

One letter-writer to this newspaper in 1979 reported being shocked by the extent to which her sex alone deprived her of consideration for jobs: “On several occasions, in replying to advertisements, I have been told, ‘Actually it is a man we are looking for, though we couldn’t say that in the paper.’”

Progress can be one hard zig-zag.

This isn’t just some curious history – the blunt barriers of the pre-1977 employment era are still having an impact on women in Ireland today. Last week saw the launch of the Balance for Better Business report, a Government-commissioned review seeking to change the fact that only a woeful 8.8 per cent of executive directors and 16.4 per cent of all directors of publicly quoted Irish companies are women.

Non-executive director roles are often what senior business people do when they retire from their executive ones. But women in their mid-60s now – the ideal age for a non-exec gig or two – may well have started their careers, or tried to, before 1977, back when employers could legally turn round and tell them to please go away.

Women also don’t have to have reached their 60s to have worked for men who began their careers thriving in single-sex environments that recognised and rewarded their drive, initiative, talent, imagination and energy, but told women who dared to call: “Actually, it is a man we are looking for, though we couldn’t say that in the paper”.

And yet the discussion of why women don’t occupy top jobs is so commonly coloured by the insistence that they “choose” different life paths. It can feel as if everybody has just forgotten the time when opposition to women in the workplace was blatant, trenchant and even lawful.

The great thing about newspaper job ads is that at least everybody knew where to find them. Now it may not be so much the content of job ads that’s the problem, as their opaquely prejudicial placement.

Earlier this year, Facebook settled US lawsuits taken over its former practice of merrily allowing job, accommodation and credit ads to be targeted at users on the basis of sex, race, age, zip code or country of origin. In one case, it was evident that women had not been shown certain job ads precisely because they were women, breaking US anti-discrimination laws in place since, um, 1964.

Chief operating officer Sheryl Sandberg leaned in to say getting this right was “deeply important” for Facebook “because inclusivity is a core value for our company” – just like it was supposed to be all along.

Yes, progress is hard. Regressing, it seems, is much easier.