Markets report: More than 97 per cent of stocks in Europe’s Stoxx 600 trading in red 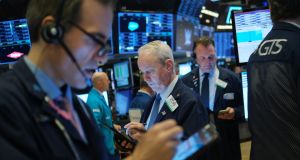 Traders on the floor of the NYSE, January 27th. Photograph: Spencer Platt/Getty

US stocks suffered their worst day in more than three months on Monday as China extended the Lunar New Year holiday due to a virus outbreak, fueling worries about the economic impact of containment efforts in the world’s second largest economy.

The benchmark S&P 500 suffered its worst weekly performance since September last week as China locked down several cities and curbed travel, reminding investors of the deadly SARS virus that killed nearly 800 people in 2002-03 and cost the global economy billions.

China’s yuan tumbled to a 2020 low and commodity-linked currencies such as the Australian dollar fell on mounting concern about the coronavirus. Key indexes for British, French and German equity markets slid more than 2 per cent, as did pan-European markets. Stocks on Wall Street fell more than 1 per cent as investors grew increasingly anxious. US equities were overdue for a correction, said David Kelly, chief global strategist at JPMorgan Funds in New York. “We have a slow and steady economy, a giddy and fast market and eventually those two things have to meet in the middle somewhere.”

Like other airlines, low-cost carrier Ryanair saw its shares fall 3 per cent to €14.71 amid concern that the coronavirus outbreak may hit the travel industry. The general market decline hit financials across Europe, including Bank of Ireland and AIB here, which fell by 2.2 and 1.3 per cent respectively. Irish-Swiss food group Aryzta, which recently appointed a new chief executive for its US business, rose nearly 4 per cent to 94 cents. The company is in the process of a major restructuring after a botched acquisition spree. Smurfit Kappa and CRH, two Iseq heavyweights, were down 3.4 per cent and 2 per cent in line with negative sentiment elsewhere.

London’s FTSE 100 suffered its biggest one-day fall in nearly four months as the coronavirus spread globally with death tolls more than tripling from last week, spooking investors about the potential financial hit to travel and China-exposed companies. The FTSE 100 index, which had recovered on Friday after the World Health Organisation issued a measured assessment of the virus, stumbled 2.3 per cent. The midcaps slid 2.1 per cent, their steepest one-day decline in more than a year. All but three stocks ended in negative territory on the main bourse. News that China’s death toll from the coronavirus has risen to 81 dragged an index of leisure and airline stocks down 2.6 per cent to its worst day in more than 3½ years. Roughly 6 per cent has been wiped off the index since last week. The sector is exposed to a slowdown in the travel market because of the outbreak, with some standout individual losers including Aer Lingus owner IAG, which dropped 5.4 per cent, and China-exposed luxury brand Burberry, down 4.6 per cent. Asia-focused financials HSBC, Prudential and Standard Chartered skidded 3.5 per cent-5 per cent as businesses shut shops and the Chinese government lengthened the week-long lunar New Year holiday by three days to try to contain the outbreak.

More than 97 per cent of stocks in the Stoxx 600 were trading in the red with many toppling from record highs, wiping out around €180 billion of market capitalisation from the European share index. Most major country indices in Europe fell more than 2 per cent, while regional sectors lost at least 1 per cent each. Germany’s Dax slumped almost 3 per cent, while France’s CAC posted its worst day in almost four months as LVMH, Christian Dior, Hermes and Gucci owner Kering fell more than 3.6 per cent.

Wall Street’s main indexes fell more than 1 per cent on Monday as investors worried about the economic fallout of a virus outbreak in China that has prompted the country to extend the lunar New Year holidays and businesses to close some operations. The benchmark S&P 500 was jolted off record highs last week as China locked down several cities and curbed travel, reminding investors of the deadly Sars virus that killed nearly 800 people in 2002-03 and cost the global economy billions. Travel-related stocks, including airlines, casinos and hotels, were the worst-hit on Wall Street, while shares of tech heavyweights that enjoyed a strong rally recently dragged markets lower. Apple, Microsoft Corp, Alphabet and Amazon. com dropped between 1.6 per cent and 3 per cent. Wynn Resorts Ltd, Melco Resorts & Entertainment Ltd and Las Vegas Sands Corp, which have large operations in China, slid between 3.7 per cent and 6.9 per cent. - Additional reporting by Reuters