European markets slip back ahead of crunch ECB meeting 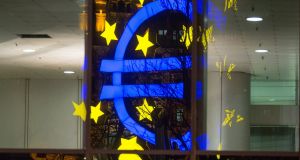 European shares retreated from recent peaks on Monday as investors paused before launching into a week packed with economic data and the European Central Bank’s first policy meeting of the year.

European shares retreated from recent peaks on Monday as investors paused before launching into a week packed with economic data and the European Central Bank’s first policy meeting of the year.

Recurring fears of a hard Brexit and bets that the Bank of England will cut interest rates hit share prices on London’s FTSE 100 blue-chip index.

The Iseq index tracked many of its European peers with a marginal decline of less than 0.2 per cent. Trading volumes were much thinner than usual, however, due a public holiday in the United States.

The biggest gainer on the Dublin index was troubled exploration company, Providence Resources, which this month appointed a new chief executive following the resignation before Christmas of Tony O’Reilly jnr. It rose 8.3 per cent to about 6 cents per share on the back of a surge in crude prices, which spiked after Libya scaled back production.

AIB performed poorly, finishing the session down by 4.3 per cent to €2.81. The bank’s share price has struggled since analysts predicted recently that it would cut its dividend payout for 2019.

The main FTSE 100 index, which hit a near six-month high in the previous session, gave up 0.3 per cent. BAT weighed the most, while Shell and BP weakened despite a jump in crude prices.

The FTSE 250 was 0.2 per cent lower, with Capita dropping 4.2 per cent after UBS downgraded the stock.

Also weighing on sentiment were comments from UK finance minister Sajid Javid that Britain would not commit to sticking to European Union rules in post-Brexit trade talks. Still, both benchmark indexes avoided any major shocks as overall trading volume remained thin, with the US markets closed.

Though sharp moves were scant, premium tonic maker Fevertree sank 27 per cent on its worst day ever after warning that annual revenue growth would be below its expectations following subdued trading over Christmas.

Intu Properties, which shed more than 70 per cent in value last year amid a string of bankruptcies on Britain’s High Street, ended 1 per cent lower after saying it was targeting an equity raise. Its shares had earlier tumbled as much as 10 per cent to a record low, while those of peer Hammerson gave up 3.7 per cent.

Defence company BAE Systems outperformed the blue-chips with a 3.7 per cent gain after saying it would buy two units being offloaded due to the merger of US rivals Raytheon and United Technologies.

The pan-European Stoxx 600 index was down about 0.1 per cent, after ending at a record high last week on optimism around US-EU trade talks. Market activity was thin on Monday because of the holiday in the US.

The benchmark European index has risen about 2 per cent so far this month, as investors bet on a recovery in global growth amid the cooling of US-China trade tensions.

Comments from ECB chief Christine Lagarde at the central bank’s first policy meeting for the year on Thursday will be a point of interest later in this week. The bank is expected to keep the deposit rate unchanged after cutting it in September for the first time since 2016.

On Monday, the retail subindex was the worst-performing sector, with Switzerland’s Dufry leading losses with a 4.5 per cent drop.

Air France dropped to the bottom of the Stoxx 600 after Davy Research downgraded the stock citing short-term pressures from its restructuring.

German stocks bucked the trend, rising about 0.2 per cent on strength in financials. Electronic payments service provider Wirecard was the biggest percentage gainer on the DAX.

US markets were closed on Monday for the Martin Luther King jnr holiday. – (Additional reporting: Reuters)