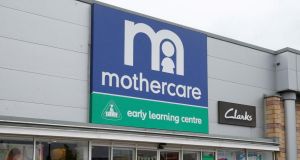 Mothercare tumbled 11.2 per cent in London after saying the reduction in its debt owed to lenders had fallen behind expectations

Concerns over a coronavirus outbreak in China and disappointing corporate earnings took their toll on European and US markets on Thursday.

European shares fell for a fourth straight session as worries over the spread of the virus created uncertainty over the potential economic fallout.

Eurozone banks also fell about 0.5 per cent after European Central Bank President Christine Lagarde struck a slightly more dovish tone than some had expected in the bank’s first policy meeting of the year.

Recruitment company CPL Resources added 3.8 per cent to €8.20 on a day in which it said full-year profit would be ahead of expectations after “robust” growth in the first half of its financial year.

Swiss-Irish food group Aryzta added 0.9 per cent, closing at 90 cent on a day in which it completed the sale of the majority of its stake in French food group Picard to Invest Group Zouari for €156 million. It retains a 4.5 per cent shareholding.

The FTSE 100 gave up 0.9 per cent, marking its steepest one-day drop in nearly two months and set for its worst weekly performance since early October.

An index of miners hit its lowest in more than a month with a 3.1 per cent drop, in line with a fall in copper prices.

InterContinental Hotels slipped 4 per cent after saying it would waive cancellation charges on bookings scheduled up to February 3rd across mainland China, Hong Kong, Macau and Taiwan.

Other companies that rely on the travel market also took a hit. Airline easyJet and cruise operator Carnival were among the worst performers, each falling about 4 per cent.

Mid-cap stock PayPoint skidded as much as 8 per cent and ended down 3.3 per cent after the specialist consumer payment provider said its annual profit would grow at a more modest rate.

Online fashion retailer ASOS provided some cheer as it advanced 9 per cent after beating sales growth expectations in the Christmas trading period.

Mothercare tumbled 11.2 per cent after saying the reduction in its debt owed to lenders had fallen behind expectations.

The pan-European Stoxx 600 index dropped 0.7 per cent, its worst session so far this year, as luxury goods makers joined airlines, banks and miners by ending the day in the red. Germany’s Dax was down 0.9 per cent, while France’s Cac 40 finished 0.7 per cent lower.

Auto stocks hit fresh three-month lows after US president Donald Trump threatened to impose high tariffs on imports of cars from the EU if the bloc did not agree to a trade deal.

Casino and hotel operators including Wynn Resorts, Melco Resorts & Entertainment and Las Vegas Sands, which draw a large portion of their revenue from China, were down between 1.7 per cent and 4.2 per cent as coronavirus worries mounted.