Dollar on track for strongest week in more than two months 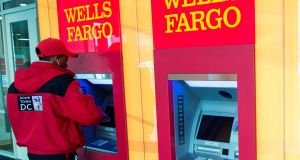 US stocks fell for a second day after Wells Fargo dragged down the banking sector. Photograph: Paul Richards/AFP via Getty

Stocks fell on Friday on news of intensifying lockdowns and weak US retail sales data, while the dollar was on track to post its strongest week in more than two months.

The Irish index of shares ended the week almost flat, finishing at 7,523 on Friday evening after pulling back from an afternoon dip.

Travel software company Datalex saw its shares dip 3.5 per cent, losing some of the gains it made in the previous session to finish the week at 55 cent.

London’s Ftse 100 slipped on Friday, posting its worst weekly performance since the end of October, as fresh lockdowns due to surging Covid-19 cases dampened hopes of a swift economic recovery.

After slumping as much as 1.8 per cent during the afternoon trade, the blue-chip index closed 1 per cent lower, with growth-sensitive mining, energy and bank stocks leading the decline.

The domestically focused mid-cap Ftse 250 index ended 0.8 per cent lower as official data showed the British economy shrank by 2.6 per cent in November, its first monthly fall since the first Covid-19 lockdown in April, as new movement restrictions were imposed. The drop was much lower than the average forecast.

After rallying more than 6 per cent on optimism around Brexit and the vaccine rollout last week, the Ftse 100 fell 2 per cent this week on concerns that harsher restrictions due to surging infections might derail prospects of a swift rebound from the pandemic-driven recession.

Among individual stocks, Aveva Group jumped 7 per cent after the industrial software provider reported a more than 26 per cent jump in third-quarter organic revenue, aided by strong and early contract renewals.

The pan-European Stoxx 600 index closed down 1 per cent in its worst session since December 21st, with losses accelerating after Wall Street stocks tumbled following big bank earnings. The Stoxx 600 logged a 0.8 per cent weekly decline, its first weekly decline since mid-December.

Adding to worries, some EU nations are receiving fewer doses of coronavirus vaccines than expected as US pharmaceutical firm Pfizer slowed shipments of the vaccine developed with German partner BioNTech, whose shares dropped 2.2 per cent.

German business software group SAP closed down 0.7 per cent, reversing early gains after it released preliminary annual results that came at the high end of guidance. Siemens Energy fell 6.3 per cent after General Electric accused a subsidiary of the power distribution company of using stolen trade secrets to rig bids for lucrative contracts.

French grocer Carrefour fell almost 3 per cent after the French government all but killed off a possible $20 billion takeover by Canada’s Alimentation Couche-Tard.

US stocks fell for a second day after Wells Fargo dragged down the banking sector in the wake of disappointing fourth-quarter results.

The energy and financial sectors led the S&P 500 lower, with Exxon Mobil dropping more than 5 per cent after a report said the company was being investigated for overvaluing assets. Utilities and real estate shares rose.