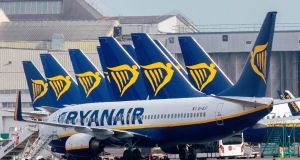 Ryanair finished the day down 5%, similar to other airlines across Europe. Photograph: Paul Faith/AFP via Getty

World stock markets hit record highs on Monday, the first trading day of the new year, as investors hoped the rollout of vaccines would ultimately lift a global economy decimated by the Covid-19 pandemic.

Euronext Dublin ended the day up 1.6 per cent after a strong day spread broadly across a number of sectors.

“If you look at stocks that have struggled during the lockdown – areas like transport and leisure – there was a bit of weakness there,” noted one trader. Among them was Ryanair, which finished the day down 5 per cent, similar to other airlines across Europe.

Dalata Hotel Group – the biggest hotel operator in the State – was down 3 per cent as fresh fears grew for the tourism sector following massive increases in Covid-19 cases in Ireland. Among the banks, AIB was down 5 per cent, but in low volumes.

On the positive side, Kingspan was up 7 per cent, albeit following a low close to last year. Two big names in the index – Kerry Group and building supplies group CRH – ended the day up 2.5 per cent and 3.5 per cent respectively.

“There wasn’t a huge amount of volume but it was reasonable given all the uncertainty that is out there,” said a trader.

The blue-chip index rose 1.7 per cent on its first day of trading with Britain outside the European Union’s orbit, with shares of Entain the top gainer. The Ladbrokes owner surged 25.3 per cent to an all-time high after saying it received proposals from US casino operator MGM Resorts for a possible offer.

Mining shares and consumer stocks were among the top gainers, with Rio Tinto giving the biggest boost to the index. Unilever and Reckitt Benckiser Group advanced between 1.5 per cent and 3.6 per cent.

The mid-cap index jumped 0.2 per cent.

Drug maker AstraZeneca jumped 1.3 per cent after Britain became the first country to introduce its low-cost and easily transportable Covid-19 vaccine, the second vaccine candidate to be distributed.

European shares rallied in the first trading session of the year on Monday, as a landmark Brexit trade deal and coronavirus vaccination campaigns across the continent bolstered expectations of a strong economic rebound.

Germany-listed shares in the world’s biggest holiday company, TUI, rose 2.7 per cent after its chief executive told a newspaper he expected “a largely normal summer” this year.

Germany’s Dax was up 0.1 per cent after a long weekend to trade below all-time highs, while France’s Cac 40 added 0.7 per cent.

Wall Street’s main indexes fell nearly 2 per cent on the first trading day of the year on Monday as nerves over the outcome of run-off elections in Georgia this week countered optimism over a vaccine-driven recovery in the global economy.

The Dow was also dragged down by an almost 4.3 per cent fall in Boeing’s shares after Bernstein cut its rating to “underperform”, saying issues with Max 787 could significantly hurt the US plane manufacturer’s free cash flow.

Before dipping in the red, the S&P 500 and the Dow notched record levels within the first few minutes of trading, attempting to extend a rally from 2020 fuelled by monetary stimulus and the start of vaccine rollouts.

Shares of Flir Systems jumped about 19 per cent after Teledyne Technologies agreed to buy the thermal imaging camera supplier for $8 billion (€6.53 billion) in cash and stock. Teledyne’s shares dropped about 9 per cent.