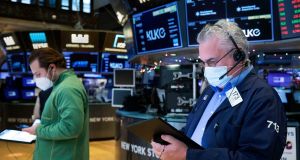 Holiday company TUI gained 5% after it said the vaccination campaign in Britain had boosted summer bookings from those aged 50 and over. Photograph: Colin Ziemer/New York Stock Exchange via AP

European shares rose for a third straight session on Thursday, as a jump in technology stocks, hopes of a large stimulus under incoming US president Joe Biden and upbeat Chinese export data boosted sentiment.

British shares also ended higher as a slew of upbeat corporate earnings supported investor sentiment at a time when rising cases of Covid-19 and fresh lockdowns across Europe raised concerns about fiscal health.

The Iseq index finished virtually flat for the session after a late afternoon rally dragged it out of the red.

It was a decent day for sentiment in the travel industry, with Ryanair finishing up 3.2 per cent to €15.76 and Irish Ferries owner Irish Continental Group closing ahead by 0.7 per cent to €4.48. Hostelworld rose 1.1 per cent to 89 cent per share. Aviation travel software supplier Datalex rose 5.5 per cent to 57 cent.

Tullow Oil shrugged off worries about global oil demand in the wake of surging European virus cases, finishing the session ahead by 9.7 per cent to 38.5 cents per share.

The blue-chip Ftse 100 index gained 0.8 per cent after three consecutive sessions of declines, with mining and energy stocks gaining the most.

Miners BHP Group and Rio Tinto were the top drivers after data showed copper and iron ore imports by China, the biggest metals consumer, hit record highs in 2020. The mid-cap index gained 0.8 per cent, with travel stocks EasyJet and TUI the best performers.

Holiday company TUI gained 5 per cent after it said the vaccination campaign in Britain had boosted summer bookings from those aged 50 and over, with that age group accounting for 50 per cent of all web bookings since the end of last year.

Primark owner AB Foods rose 1.2 per cent after it said it was confident of strong growth upon reopening, but warned of higher loss of sale if current lockdowns were to last until March.

The pan-European Stoxx 600 index rose 0.7 per cent, hitting new highs since February 2020, with mining, auto and travel stocks among the top performers.

European chip makers received a boost after Taiwan’s TSMC posted a record high quarterly profit due to demand for devices requiring high-end chips. Dutch semiconductor equipment makers ASMI and ASML jumped 7.6 per cent and 5.9 per cent respectively, while the wider tech index was up 1.9 per cent.

Carrefour slipped 2.5 per cent after the French government took a tough line against any takeover of the retailer by a foreign company in the wake of a $20 billion bid approach by Canadian operator Alimentation Couche-Tard.

Delta Air Lines gained 3.6 per cent as chief executive Ed Bastian forecast 2021 to be “the year of recovery” after the coronavirus pandemic prompted its first annual loss in 11 years. The S&P 1500 airlines index added 3.3 per cent.

Eight of the 11 major S&P sectors rose with economy-linked energy, financial and industrials among the biggest gainers. The domestically focused small-cap Russell 2000, as well as the Dow Jones Transports index, considered a barometer of economic health, both scaled all-time highs.