Irish market fails to catch the mood as it slips into red, led by heavyweight CRH and the banks 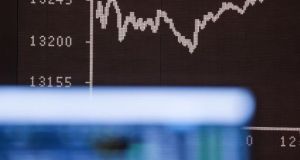 The Iseq index ended the week in negative territory, in sharp contrast to many of its European peers

European stocks logged their strongest weekly gains since November on Friday, with Germany’s DAX hitting a record high on the back of better-than-expected economic data and encouraging earnings updates from chipmakers.

The Iseq index ended the week in negative territory, in sharp contrast to many of its European peers. It was 0.7 per cent lower at 7700.65.

Heavyweight CRH lost much of its gains from earlier in the week, falling 2.2 per cent to €37.90. Staying with construction, Kingspan also declined, losing 2.4 per cent to €65.45.

Britain’s FTSE 100 index inched higher on Friday to end the week with gains of more than 6 per cent as investors bet on a swift economic recovery, while housebuilder Barratt Developments surged on plans to resume dividend payouts next month. The UK’s biggest homebuilder jumped 4.5 per cent to the top of the FTSE 100 index after it also posted a rise in forward six-month sales. The blue-chip index gained 0.2 per cent, led by consumer discretionary and industrial stocks.

Clothing retailer Marks & Spencer fell 2.4 per cent after its chief executive said the company is likely to see a further deterioration in sales in its clothing and homewares division in the current quarter due to the latest national lockdown.

The pan-European STOXX 600 index rose 0.7 per cent to complete a 3 per cent advance in the first week of 2021, largely driven by hopes that a Democrat sweep of the US Senate would lead to a large fiscal stimulus package.

Franco-Italian chipmaker STMicroelectronics rose 1.9 per cent after its revenue estimate for the fourth quarter came in above the previous range.

French catering and food services group Sodexo raised its margin outlook for the first half of 2021 in a move that saw its shares jump 10.5 per cent to the top of the STOXX 600, while peer Compass gained 4.2 per cent..

Swiss bank Credit Suisse fell 3.6 per cent after it forecast a net loss for its fourth quarter due to higher provisions for a long-running dispute in the US.

The S&P 500 and the Nasdaq scaled new highs on Friday, as hopes of more economic stimulus to ride out a pandemic-led downturn eclipsed concerns over a significant loss of pace in a labour market recovery.

The blue-chip Dow eased from its record level, weighed down by heavyweights Goldman Sachs and 3M, but was still set for its fourth straight weekly gain.

Electric car-maker Tesla’s shares jumped 7 per cent, taking its market capitalisation to more than $800 billion for the first time ever. Micron Technology gained 0.2 per cent after the chipmaker forecast second-quarter revenue above estimates, as a global shift to remote work and a recent uptick in 5G smartphone adoption drove demand for its chips. US-listed shares of Baidu rose 13 per cent on plans to form a company to make smart electric vehicles, according to two sources familiar with the matter.