Aryzta falls 8.8% after broker warns the company could have to ask shareholders for more cash to ease debt woes 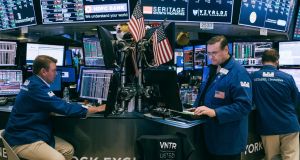 Airline Ryanair was one of the most active stocks on a quiet day, closing 2.12 per cent up at €13.26 as investors digested the weekend’s news that a dispute with about one quarter of its Irish pilots was likely to go to mediation. The airline still faces strikes later this week, but its stock traded up as much as 2.5 per cent at one point on Monday before dipping back slightly.

Smurfit climbed 1.61 per cent to what dealers said was a new high of €36.60. “A lot of people are backing the story, and the dynamics are pointing to further upgrades,” said one trader.

However, only around 285,000 of its shares changed hands in Dublin, 30 per cent of the 100-day average, leaving traders cautioning that Monday’s closing price may not be a fair reflection of how the market sees the stock.

Hotel group Dalata was a little weaker as investors speculated that the Government would axe the special 9 per cent Vat rate for the hospitality sector in autumn’s budget. Dalata closed 0.15 per cent down at €6.82. Dealers said it was well down on mid-July highs.

HSBC shares dipped 7.2 pence sterling or 1 per cent to 708.6p despite the bank boosting profits as it pushes ahead with a strategy put in place by new chief executive John Flint.

The lender reported pre-tax profit of $10.7 billion for the half-year ended June 30th, up from $10.2 billion for the same period in 2017. However, adjusted pretax profits fell from $12.4 billion to $12.1 billion, which HSBC said was due to hiring more staff and expanding its digital network.

Tesco shares nudged up after the supermarket giant said its strategic partnership with France’s Carrefour would become operational in October.

Tesco said the relationship would cover global suppliers, and would allow for the joint purchasing of own-brand goods and store equipment such as trolleys, fixtures and cleaning supplies. Shares ended down 0.1 per cent at 259.4p.

On the FTSE 250, Spire Healthcare shed over 21 per cent to end down 53.8p at 193.4p after the private hospitals operator warned over its full-year performance in the face of falling NHS spending.

Irish-Swiss baker Aryzta crashed 8.82 per cent to 11.315 Swiss francs after Berenberg became the latest broker to warn that the maker of McDonald’s burger buns could have to ask shareholders for more cash to ease debt woes.

The shares hit a one-year low of 10 francs in Zurich at one point on Monday following the assessment by Berenberg analyst Fintan Ryan that Aryzta would have to resort to a capital increase to alleviate chronic debt levels.

German industrial gas-maker Linde sank 8 per cent to €194.05 after saying regulators may ask it and its US rival Praxair to sell more assets in order to get anti-trust approval for their possible merger.

Germany suffered the biggest drop in industrial orders in 1½ years, driving industrial giants Siemens and Thyssenkrupp down 0.4 per cent and 0.9 per cent.

The S&P 500 edged higher on Monday, buoyed by strong results from Berkshire Hathaway and Tyson Foods, while the Nasdaq got a lift from gains in Facebook and PepsiCo.

Warren Buffett’s Berkshire Hathaway rose 3.7 per cent after the conglomerate reported a 67 per cent surge in quarterly operating profit.