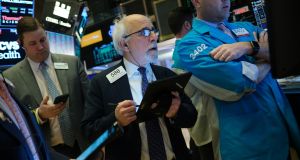 Equity markets slid on Tuesday, although the Iseq was flat, after Apple said it was unlikely to meet its sales guidance because of the coronavirus outbreak in China, a warning highlighting the epidemic’s threat to global growth and corporate profits.

Kerry Group led the Iseq on Tuesday as its shares rose to a record high before falling off to close 3.85 per cent higher on the day at €121.50. The increase followed the company’s report that trading profit grew 12.1 per cent in 2019 to €903 million, while group sales rose 9.6 per cent to €7.2 billion.

Banks again took a hit on the day, with the process of government formation trundling on without any clarity as to what combination of political parties may emerge.

AIB fell 3.77 per cent to €2.30, while Bank of Ireland slipped 3.1 per cent to €4, although traders signalled that there were large sellers in the market, which could have contributed to the decline.

Paddy Power-owner Flutter Entertainment gained 1.22 per cent to close at €103.90 after the Australian competition regulator informally approved its planned merger with the Stars Group. Investors will now await the view of the UK regulator.

Paper and packaging group Smurfit Kappa declined 2.67 per cent to €33.50 despite no specific news emerging. Peers DS Smith and Mondi also fell on the day, indicating a broader sectoral hit.

London’s Ftse 100 slid to a two-week low on Tuesday, weighed down by a near 7 per cent drop in financial heavyweight HSBC after its annual profit declined and it laid out plans for a major strategic overhaul that included 35,000 job cuts and the halting of share buybacks.

Holiday Inn-owner InterContinental Hotels outshined gaining 1.6 per cent despite it saying it would take a hit from the coronavirus after a fall in revenue per room due to the impact of the past year’s protests in Hong Kong.

Utilities Severn Trent and United Utilities also outperformed the broader market, climbing about 2 per cent each after JPMorgan sounded bullish on the sector following a recent price control published by Britain’s water regulator.

NMC Health advanced for the second straight session, climbing 5.4 per cent, a day after its founder, BR Shetty, resigned as co-chairman of the healthcare company amid doubts about the shareholdings of its major investors. The company is still worth less than half of what it was three months ago.

Shares of STMicroelectronics and Dialog Semiconductor, which supply components to Apple, fell 1.21 per cent and 4.46 per cent, respectively.

Bucking the trend, Italian stocks rose on the back of bank shares after Intesa Sanpaolo made a surprise €4.86 billion bid for smaller rival UBI Banca. UBI surged nearly 23.55 per cent and was the top gainer on the Stoxx 600.

US stocks dropped on Tuesday after a surprise sales warning from technology bellwether Apple fanned worries about the impact of the coronavirus outbreak on global supply chains.

The world’s most valuable technology firm said it would fall short of its recently announced first-quarter sales target because of slower iPhone production and weaker demand in China, sending its shares down 2.4 per cent. The news also sent Apple suppliers, including Qualcomm, Broadcom, Qorvo and Skyworks Solutions, lower by 1.6-2.4 per cent.

Walmart shares rose 0.8 per cent even after the world’s biggest retailer forecast slowing online growth for the year and reported weak results for the holiday quarter.

Among gainers, Kroger climbed 5.4 per cent after Warren Buffett’s Berkshire Hathaway unveiled a $549.1 million stake in the supermarket chain.

Tesla jumped 5 per cent as Bernstein and Morgan Stanley raised their price targets for the electric carmaker’s shares.