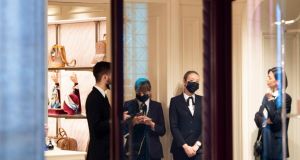 Employees of luxury shopping chains in Via dei Condotti wear masks against the Coronavirus emergency in Rome. A rally in luxury stocks led by Gucci owner Kering and optimism over fewer new coronavirus cases in China pushed the Stoxx 600 up 0.6 per cent. Photograph: Claudio Peri/EPA

European shares rose on Wednesday after China reported that the number of new cases of coronavirus infections was falling, raising hopes that the outbreak may plateau soon.

Both Germany’s Dax and the pan-European Stoxx 600 hit fresh record highs during the session, while on Wall Street the S&P 500 and Dow Jones also reached all-time highs.

The Iseq rose by almost 0.7 per cent adding to Tuesday’s 1.3 per cent gain. The bank stocks recovered as investors’ wariness of a left-wing Irish government receded. Bank of Ireland, which dropped sharply on Monday in the first session after the general election result, soared 8.2 per cent to just below €4.18, while AIB added 1.4 per cent to €2.38.

UK shares advanced on Wednesday, helped by gains in heavyweight oil firms and investors’ relief that the number of new cases of coronavirus infections out of China was dropping.

The FTSE 100 add 0.5 per cent, boosted by gains for oil majors Shell and BP, as they tracked a surge in crude prices. Anglo American rose 4.9 per cent as UBS raised its rating on the mining stock.

The mid-cap FTSE 250 added 0.7 per cent, led by gains for payments company Finablr and home furnishings retailer Dunelm, which jumped 8.7 per cent after an upbeat profit forecast.

Corporate services firm Sanne Group was up 10 per cent after analysts at brokerage Jefferies issued a “buy” rating on the stock.

A rally in luxury stocks led by Gucci owner Kering and optimism over fewer new coronavirus cases in China pushed the Stoxx 600 up 0.6 per cent while Frankfurt’s Dax closed up 0.9 per cent. Both reached record highs.

In Paris, the Cac 40 rose 0.8 per cent, lifted by the 6.3 per cent rise for Kering, which reported better than expected quarterly results. The luxury goods company remained upbeat, despite saying that it is halting spending in China as a result of the virus outbreak. That lifted other luxury stocks such as Louis Vuitton owner LVMH and Christian Dior.

Languishing at the bottom was Dutch bank ABN Amro after clocking a weaker-than-expected fourth-quarter net income. But the world’s second-largest brewer, Heineken, added 5 per cent after it reported earnings that beat analysts’ estimates.

All major S&P sectors were higher as investors bet that the economic fallout from the coronavirus will be contained.

The strengthening of Bernie Sanders’s front-runner status in the race of the Democratic nomination for the 2020 presidential election appeared to add support to markets after his narrow win in New Hampshire, as some investors speculated that it increased the chances of the incumbent staying in office.

Private health insurers United Health Group, Centene, Humana and Anthem gained between 3.2 per cent and 4.5 per cent and analysts attributed the share move to a smaller-than-expected margin win for Sanders, who supports a public health insurance system.