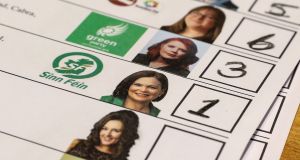 Ireland’s benchmark ISEQ Index clawed back from a weak opening on Monday after election polls put Sinn Féin in contention for a role in the next government.

The Dublin market was down 0.5 per cent at midday after losing as much as 1.4 per cent at the open following the election.

Banking and property stocks were in the red in Dublin with Bank of Ireland and AIB losing 4.5 per cent and 2.24 per cent respectively, having fallen by as much as 7 per cent earlier in the day.

The country’s largest private landlord, Irish Residential Properties Reit declined 7 per cent, while Hibernia Reit was 3.4 per cent lower. Glenveagh and Cairn Homes were down 6.9 per cent and 6.8 per cent respectively while hotel group Dalata lost 2.85 per cent.

Other moves in Dublin included insurer FBD, which was trading down 2.4 per cent, and Ryanair, which was 2 per cent lower.

Among the gainers was box maker Smurfit Kappa, up 1.6 per cent.