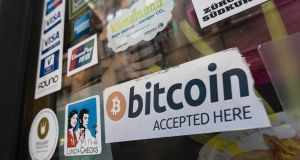 The most-traded form of private money is frequently touted by enthusiasts as a safe haven asset, but its correlation with gold or US treasuries is poor. Photograph: iStock

Bitcoin appears to have decisively breached $10,000 (€9,163) for the first time since September, and now traders are setting their sights on the next resistance level.

The longest surge for the digital coin since June brought it to as high as $10,481 on Wednesday. It was 1.2 per cent higher at $10,353 by mid-morning in London, heading for a sixth day of gains.

The most-traded form of private money is frequently touted by enthusiasts as a safe haven asset, but its correlation with gold or US treasuries is poor. The current rally in fact coincides with a global equity benchmark near a record-high, and a mild decline in investment grade debt. With no underlying fundamentals to plumb, Bitcoin investors are often left studying technical trends.

Trading has tended to accelerate when the token climbs toward the five-figure mark. During the February rally, trades clustered between $9,750 and $9,850. Orders then fell off as it reached $10,000 as buyers seemed to wait for evidence of fresh momentum.

Datalex sales warning puts Desmond loans in focus 13:56
Coronavirus: how hard has Ireland’s economy been hit by pandemic? 13:27
Virgin Media takes on extra staff due to unprecedented demand 12:59
BA in union talks to suspend around 32,000 staff - source 12:55
EU court says short-term lets can be required to get official sanction in housing crisis 11:47