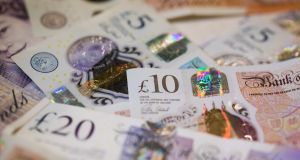 Earlier in the day, the pound had weakened by 0.5 per cent to 91.71 pence. Photograph: Bloomberg

Sterling briefly rebounded from near three-year lows versus the euro on Tuesday after German chancellor Angela Merkel said the European Union would think about practical solutions regarding the post-Brexit Border.

Though the British currency later gave up much of its gains to trade broadly flat by the end of the London trading session, the magnitude of the pound’s moves took traders by surprise as Mrs Merkel’s comments didn’t indicate a fundamental shift in the European Union’s stance on Brexit.

British prime minister Boris Johnson fired the opening salvo in his bid to renegotiate Britain’s divorce terms from the EU, saying that the “backstop”– the insurance policy included in Britain’s Withdrawal Agreement with the EU to avoid the return of a hard Border – should be replaced with a pledge.

The bloc and its leaders have repeatedly refused to reopen the Withdrawal Agreement.

European Council president Donald Tusk said a letter sent to him by Mr Johnson included no “realistic alternatives” to the contentious backstop.

“Merkel’s comments seemed to have triggered some model-based buying but I don’t see a fundamental shift and the pound’s gains are likely to be shortlived,” said Neil Jones, head of hedge fund currency sales at Mizuho in London.

Against the euro, the pound vaulted as much as a quarter of a percentage point to 91.02 pence before retracing most of its gains to stand broadly flat on the day at 91.38 pence. Earlier in the day, the pound had weakened by 0.5 per cent to 91.71 pence, not far away from an October 2016 low of 93.26 pence hit last week as investors sold the British currency on concerns that the United Kingdom was headed towards a showdown with the EU over Brexit negotiations.

The falls came after signs in recent weeks that investors were becoming less pessimistic on the pound. – Reuters

1 Brexit: System agreed for Irish goods to skip checks on UK trade
2 High Court appoints interim examiner to Compu b parent company
3 Ireland faces 'deep downturn' this year and may not rebound until 2024 if there is a second wave
4 Could your old car be giving away all your secrets to its new owner?
5 How much do Irish people earn? And what will Covid-19 do to our wages?
6 Former Worldspreads chief Conor Foley faces €730,000 fine
7 Why are markets booming when a crash is on the way?
8 ‘The rental situation stops me moving back home’
9 Second Covid-19 outbreak and no-deal Brexit an appalling vista
10 Red tape logjam creates fear for Irish timber supply
Real news has value SUBSCRIBE