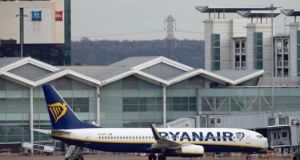 Ryanair rose 4 per cent in trading on Monday

European shares trimmed early losses on Monday as comments from the ECB brought down treasury yields, though inflation expectations and profit-taking in technology stocks dragged the benchmark index lower.

Travel-related stocks rose on Mr Johnson’s plans, with Ryanair gaining 4 per cent to €16.64.

Kingspan was down 2.7 per cent to €61 after giving back some of the strong gains it saw late last week. Smurfit’s strong run showed signs of ending, with the stock closing down 2.2 per cent to €40.68.

After falling as much as 1.2 per cent after a jump in commodity prices sparked fears of a spike in inflation, the blue-chip FTSE 100 cut losses in afternoon trading as Mr Johnson unveiled a roadmap to exit the lockdown.

British Airways and Aer Lingus owner IAG jumped 7.5 per cent to the top of the FTSE 100, while InterContinental Hotels, Wizz Air and Cineworld gained between 3.9 per cent and 8.9 per cent.

Oil heavyweights BP and Royal Dutch Shell jumped more than 2 per cent as crude prices gained. The mid-cap index fell 0.3 per cent, with G4S sliding 9.8 per cent as Allied Universal won a months-long takeover battle for the world’s largest private security firm after Canada’s GardaWorld said it would not raise its offer.

The pan-European STOXX 600 index settled 0.4 per cent down after dropping as much as 1 per cent, led by declines in technology companies and retail stocks.

Italy’s Atlantia rose more than 4 per cent on expectations that the infrastructure group would receive a binding offer for its 88 per cent stake in motorway unit Autostrade per l’Italia this week.

French car parts maker Faurecia was one of the biggest fallers, retreating 4.7 per cent after it swung to a net loss in 2020.

US stock indexes fell on Monday as climbing Treasury yields and prospects of rising inflation triggered valuation concerns, hitting shares of high-flying growth companies. Shares of Apple, Microsoft, Facebook, Alphabet, Tesla, Netflix and Amazon. com resumed a fall from the previous week, falling between 0.6 per cent and 2.1 per cent in early trading.

Boeing dropped 2 per cent after showers of jet engine parts over residential areas on both sides of the Atlantic have caught regulators’ attention and prompted the suspension of some of its older planes from service.

Discovery gained 6.2 per cent after the media company said it was expecting 12 million global paid streaming subscribers by the end of February, as coronavirus-led restrictions kept people home.

Kohl’s jumped 5.7 per cent after a group of activist investors nominated nine directors to the department store chain’s board.

Principal Financial Group surged 8.3 per cent after a media report that activist investor Elliott Management had taken a stake in the life insurance company and planned to push for changes.