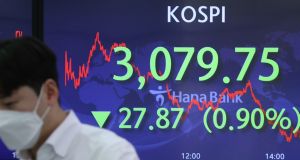 A sell-off in US government bonds – whose returns are eroded by inflation – continued. The yield on the 10-year note, which moves inversely to price, climbed 0.03 percentage points to 1.37 per cent.

The 10-year yield started the year just above 0.9 per cent, but has risen consistently with predictions that US President Joe Biden’s proposed $1.9 trillion(€1.6 trillion) fiscal stimulus package will feed through to faster price rises.

“The main concern is related to the prospect of increased inflation,” said Tancredi Cordero, chief executive officer at advisory firm Kuros Associates. “There’s a lot of concern amongst investors in fixed income and businesses that are sensitive to that.”

The big question is whether rising inflation will push the Federal Reserve away from its path of ultra-loose monetary policy. Its chair Jay Powell will on Tuesday and Wednesday give his semi-annual testimony to the Senate Banking and House Financial Services Committees. These will be “important events,” said Jim Reid, research strategist at Deutsche Bank.

Futures markets suggested the negative sentiment would spread into the US session. Futures tracking the blue-chip S&P 500 fell 0.8 per cent and those for the Nasdaq 100 lost 1.3 per cent.

Oil prices continued to rally, meanwhile, on hopes for growing demand as the global economy reopens following the rollout of Covid-19 vaccines. Oil is also viewed by some investors as an inflation hedge.