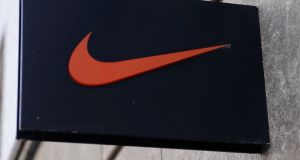 Nike dropped 2.7 per cent as the company faced backlash over its choice of Colin Kaepernick, the first NFL player to kneel during the national anthem as a protest against racism, as a face for the 30th anniversary of its ‘Just Do It’ slogan. Photograph: Carlo Allegri/Reuters

Global stocks fell on the second trading day of September with rising trade uncertainties still playing on the minds of investors.

US stocks dipped with declines in Facebook, internet stocks and Nike causing a choppy environment.

The Iseq fell but outperformed European peers while the UK’s top share index traded in line with the broader Stoxx 600 amid a drop among mining stocks and a fall in WPP shares.

The Iseq overall index dipped 0.28 per cent on Tuesday with company results leading to Cairn Homes and Dalata closing the day lower.

Housebuilder Cairn Homes dropped 2.92 per cent to €1.53 on the day, hitting a 52 week low, despite posting broadly positive results on the day. With uncharacteristically heavy volume, Cairn traded up for most of the morning but fell after lunch while its UK peers also suffered on the day.

Dalata – the State’s largest hotel operator – fell 2.69 per cent to €6.87 on Tuesday despite beating analyst expectations and posting a maiden dividend. The company said revenue rose 10.6 per cent to €180.6 million while profit increased 8.3 per cent to €35.4 million in the first six months of the year.

Elsewhere, Ryanair fell 2.65 per cent to €13.77 despite announcing positive traffic statistics. In what appears to be a broader industry move, the company’s peers EasyJet and IAG also fell on the day.

Finally, financials were positive on the day with heavy volume in Ireland’s largest bank by assets, Bank of Ireland. The stock improved 0.42 per cent to €7.115.

The blue-chip FTSE 100 index closed down 0.62 per cent. WPP dropped 6.2 per cent after the advertising company cut its profit margin guidance as the group restructures.

A drop in mining stocks as copper prices declined was the biggest weight on the FTSE with Rio Tinto, BHP Billiton and Glencore down 2.1 per cent, 1.9 per cent and 1.8 per cent.

Shares in Halfords Group were up 6.9 per cent after the automotive and cyclical products retailer reported a rise in underlying sales in a tough trading environment. Halfords also maintained its full-year profit outlook.

The Stoxx Europe 600 Index dropped 0.7 per cent to the lowest in two weeks with Danske Bank, Telecom Italia and Old Mutual amongst the losers.

Shares in Danske Bank fell 6.19 per cent after a media report suggested a money laundering scandal centred on its Estonian branch could be bigger than previously thought. The Danish bank handled up to $30 billion of Russian and ex-Soviet money through non-resident accounts via its Estonian branch in 2013 alone, according to an independent investigation, the Financial Times reported late on Monday.

Elsewhere, French reinsurer Scor SE spurned an €8.3 billion unsolicited takeover offer from its biggest shareholder, Covea, which said it’s still interested in pursuing a deal. Scor shares climbed the most in almost a decade, or by 9.53 per cent on the day.

Facebook fell 2.5 per cent after brokerage MoffettNathanson downgraded the social media giant to “neutral”, citing revenue growth deceleration. Other internet stocks Alphabet, Twitter and Snap fell between 1 per cent and 2.4 per cent, while the S&P technology index dropped 0.3 per cent.

Nike dropped 2.7 per cent as the company faced backlash over its choice of Colin Kaepernick, the first NFL player to kneel during the national anthem as a protest against racism, as a face for the 30th anniversary of its “Just Do It” slogan.

Helping curb losses was Amazon. com, whose shares rose 1.8 per cent in their seventh straight day of gains, hitting yet another record and joining Apple in the $1 trillion market cap club.