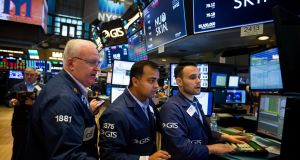 The New York Stock Exchange in New York on Friday. The S&P 500 and Dow Jones Industrial Average were largely flat on the day. Photograph: Michael Nagle/Bloomberg

Global stocks ended August much as they began the month – under the dark cloud of a potentially worsening trade war.

Poor sentiment over trade hit stock markets across Europe, weighing on more volatile sectors, such as financials and commodity stocks. Reports that US president Donald Trump was planning new tariffs on China ramped up the trade dispute between the world’s two largest economies.

Closer to home, Mr Trump rejected an offer from the European Union to eliminate tariffs on cars and said the EU’s trade policies were “almost as bad as [those of] China”, a media report said.

“European stocks have limped into the end of a disappointing month in the wake of last night’s comments from president Trump that the EU needs to do much more to come to an agreement with the US on trade,” Michael Hewson, chief market analyst at CMC Markets UK, said.

The Iseq finished the day down 31 points at 6,773, which was roughly in line with movements elsewhere in Europe. Shares in Independent News & Media (INM) ticked up 2 per cent to 8 cent after company posted a disappointing set of results, showing pre-tax profit fell almost 23 per cent in the first half of the year as advertising and print circulation revenue declined.

Troubled food group Aryzta fell a further 5 per cent to €7.95 as investors await the latest management initiative to reverse the company’s fortunes. Building materials giant CRH, meanwhile, fell nearly 2 per cent to €28.61 amid escalating trade tensions. Ryanair trade marginally down at €14.19 while Bank of Ireland and AIB were also down marginally at €7.04 and €4.84 respectively.

Britain’s top share index fell on Friday and ended the month with its biggest loss in three years as a stronger pound and broader worries over an escalation in a trade war between the United States and China dented appetite for UK stocks. The blue-chip FTSE 100 was down 1.1 per cent at 7,432.42 points at its close as cyclical sectors fell, while mid caps were flat in percentage terms.

Oil majors BP and Royal Dutch Shell were both down about 1.7 per cent as the price of oil fell. Likewise, a weaker copper price was a drag on heavyweight miners. Shares in Glencore, BHP Billiton, Rio Tinto and Anglo American all fell between about 0.8 per cent and 2.9 per cent. However, Whitbread’s shares were standout gainers. They soared more than 14 per cent to hit their highest level since December 2015 after agreeing to sell the group’s Costa coffee chain to Coca-Cola Co for $5.1 billion.

European shares fell for a second day on Friday on reports that US president Donald Trump is planning more tariffs on China, with Europe’s STOXX posting its worst monthly performance since February. The pan-European STOXX 600 ended the session down 0.8 per cent. Germany’s Dax, heavier in trade-sensitive industrial stocks, fell 1 per cent. All sectors except one were in negative territory. Sparring over trade between Mr Trump and the European Union weighed on car stocks, down 1.6 per cent and the worst-performing sector. Mr Trump was reported to have rejected an EU offer to eliminate car tariffs, saying its trade policies are “almost as bad as China”. European Commission president Jean-Claude Juncker said the EU would respond in kind if the US imposed car tariffs. “It’s very hard to see a decisive resuscitation of risk appetite until these tensions are resolved,” said Paul O’Connor, head of the multi-asset team at Janus Henderson Investors. Daimler, Volkswagen, BMW, and Continental were among the biggest weights on the Dax, falling 1.4 to 1.9 per cent.

The S&P 500 and the Dow Jones Industrial Average were largely flat on Friday hit by concerns about ongoing trade talks between the United States and other major economies, but gains in Apple and Amazon lifted the Nasdaq. Apple rose 1.6 per cent, extending its gains for the seventh day. Warren Buffett said Berkshire Hathaway had added to its stake in the iPhone maker and Apple announced a September 12th event, at which it is expected to unveil new iPhone models Amazon. com was up 0.8 per cent, topping $2,000 for the second day in a row to renew its push to join Apple in the $1 trillion market cap club. Seven of the 11 major S&P 500 sectors were lower, with the energy sector leading the decline with a 0.80 per cent drop. The S&P financial index fell 0.25 per cent with JPMorgan down 0.8 per cent, Goldman Sachs off 0.2 per cent and Citigroup which dropped 0.7 per cent. – Additional reporting by Reuters