Wall Street’s 30 days of hell: no sleep, no meals, no family 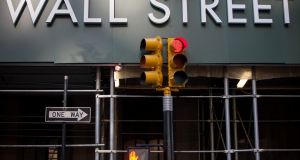 Wall Street has its four quarterly earnings seasons - but could it be time for a change? Photograph: Michael Nagle/Bloomberg

For more than a quarter century, Wall Street analyst Mike Mayo has danced to the steady beat of corporate America.

His work habits, his family events, his social life, even his workouts and vacations -- all have been dictated by the seemingly immutable cycle of quarterly earnings reports.

Four times a year, forget about everything else. The kids? Find a babysitter. Gym? Try 4:30 a.m. During the 30-day crush, adrenaline runs so high that sometimes Mayo neglects to eat. He jumps and yells and doubles up on phones. He marked his 100th earnings season this year with a catch-your-breath cup of hot chocolate.

But what if, for American finance, the Earth abruptly shifted -- if the four seasons were suddenly reduced to two? It might sound crazy. But the idea has now been raised by none other than President Donald Trump. In an August 17th tweet, he suggested the Securities and Exchange Commission might explore the possibility.

It also would deprive analysts’ shops of at least one seasonal pleasure: hearing conference-call hold music throughout the office. Quarters, Mayo says, are “the rhythms of my life.” He was relieved when his first daughter, now grown, was born the day after Q2 earnings ended.

Perhaps more important, critics warn, is that shifting corporate America to a twice-year schedule might reduce transparency for the investing public. Currently, US businesses must part the kimono, so to speak, every three months. In a ritual that rules Wall Street and is as constant as summer turning to fall, more than 3,000 publicly traded companies publish reams of crucial financial updates. It’s like a checkup that reveals a company’s health (or the extent of its disease) and proclaims its view of the future.

Earnings day involves weeks of preparation and small armies of executives, investor-relations people, legal counsel and numbers crunchers. Together they’re responsible for a press release, financial statements and a script for the analyst conference call, which is publicly accessible and usually lasts about an hour.

Companies pray earnings day will be boring. No surprises, no mishaps, no chief executives berating analysts. There are nagging details to re-check in order to avoid game-day snafus. Numbers must be accurate. Executives must be ready for the most probing questions.

Then there are details few people on the other side of the calls even consider: Is the phone system working right? Is the air conditioning turned off and no construction outside.

Likewise, investors devote untold hours to the parsing of every spreadsheet and every pronouncement on the earnings calls. Jefferies Financial Group said on its website that it has 140 analysts who publish their thoughts on more than 2,000 stocks. That’s a lot of phone time.

“I’ve been up until 3 in the morning working through every nuance in the release and every word that was said in the conference call,” said Andy Hopkins, who heads equity research for asset manager Wilmington Trust Co. “It’s a major decision point.”

Even if they were required to report just twice per year, some companies might opt to continue on a quarterly system to keep investors informed.

“It’s not like we’d just put our feet up on our desks for six months in between,” said Loren Mortman, president of investor relations firm The Equity Group Inc.

As Brett Goodman, chief communications officer at E*Trade Financial Corp., put it, earnings are never really over. They loom throughout the year.

“In terms of every quarter’s cadence, the run-up to earnings starts as soon as earnings finishes,” Goodman said. “When we’re in the room preparing for quarterly earnings we’re already thinking about what we’re going to do for next quarter.

The rest of the world’s reporting cycles vary. The European Commission ended the quarterly requirement in 2013, after Japan went to four times a year from two in the 2000s.

Supporters of Trump’s idea say going biannual would free up US CEOs to focus more on the big picture and give flexibility to small companies. And Wall Street research spending has been under scrutiny since European financial regulations clicked into place in January, unbundling its cost from other services. Investors are also re-examining their research consumption, particularly as algorithms increasingly take over trading.

Critics, however, abound. A study by the CFA Institute of the UK concluded that switching to biannual reporting failed to eliminate short-term thinking. It also said most companies continue to report quarterly even when they’re not required to.

“An efficient market trades on fundamentals, and if we have less fundamental data, that would be tricky,” said Liz Young, senior investment strategist at BNY Mellon Investment Management.

Robert Pozen, an MIT Sloan School of Management senior lecturer, said moving to twice a year could make it more tempting to trade on inside information because there’d be such a long time between legitimate disclosures.

Craig Huber, an analyst at Huber Research Partners , said the four-a-year system allows for more transparency because otherwise the period between every report would be “a lifetime.”

Huber’s opposition comes despite his workload of 22 companies, including Facebook and CBS, many of which report on the same day.

“My record is seven,” he said. “When you get above three, it’s numbing.”– Bloomberg