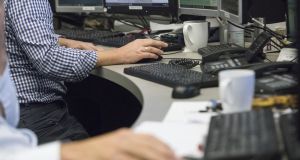 The Central Bank, responsible for making sure financial firms were ready this week for Europe’s biggest market rules shake-up in a decade, failed to meet a key target of its own as the new regime took effect on Wednesday.

The far-reaching reforms, known as Markets in Financial Instruments Directive (MiFID II), include the imposition of significantly higher obligations on banks and investment firms to report transactions, including equities, commodities and bonds, to regulators.

While the Central Bank had planned to have systems in place where its computers could automatically receive data from financial firms – referred to as “machine-to-machine” reporting – it told companies it regulates last month that an “issue” had cropped up that would not be rectified before MiFID II went live on January 3rd.

A spokeswoman for the Central Bank said that machine-to-machine reporting “will not be available until later in 2018”, meaning financial firms must continue to actively file detailed reports on transactions via an online system, which was upgraded recently.

More than seven years in the making and containing 1.7 million paragraphs of rules, MiFID II is aimed at increasing transparency and investor protections and helping to avoid some of the problems of the last financial crash. Proponents of the new rules say that regulators’ access to swathes of transaction data will help them track trades and spot asset bubbles early, after failing to see the last crisis coming.

The chairman of the European Securities and Markets Authority said on Wednesday that the regulatory overhaul got off to a comparatively smooth start, with no teething problems.

“What we can see, from our part, is no glitches so far,” Steven Maijoor said, adding that the rules mean that “for the first time, we see data on all financial instruments in the European Union”.

Regulators eased the burden on companies ahead of the start period, giving grace periods on some of the biggest issues as banks and asset managers struggled to comply in time.

It is estimated that financial firms had absorbed about €1.7 billion on compliance costs as they prepared for MiFID II. The new rules were delayed by a year to give banks, investment firms and exchanges more time to get ready.

Investors have been sitting on their hands with trading volumes below average, though the first week of the year tends to be quiet anyhow.

TP ICAP, the world’s largest interdealer broker, expects transactions in bonds, swaps and other securities typically traded off-exchange to be lower than usual across most markets this month.

Markus Ferber, the lead lawmaker on the new rules in the European Parliament in Brussels, said that low volumes aren’t due to the introduction of the laws. There was “too much panic” about the new rules, he said.

Harps Sidhu, head of capital markets at consultants KPMG, said it would become clearer by the end of the week if transaction reporting was working properly.

“The key thing to realise is MiFID II isn’t done. People are at various stages of readiness, which I think everyone accepts,” Mr Sidhu said. – Additional reporting, Bloomberg, Reuters