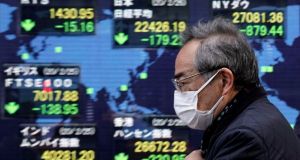 Panic sparked by a spike in coronavirus cases sent European stock markets tumbling to a four-month low on Thursday.

The Iseq index closed 3.84 per cent on the day. Paddy Power owner Flutter Entertainment shed more than 8 per cent after reporting that profits fell 38 per cent to €164.3 million last year as it stepped up US investment and felt the impact of new taxes and regulatory charges.

Flutter lost as much as 10 per cent, but clawed back some ground to close 8.22 per cent down at €96.60. Chief executive Peter Jackson agreed that coronavirus could hit the sporting events on which many of the gambling giant’s customers like to bet.

Traders said that poor results from betting software maker Playtech fed through to gambling-related stocks as a whole.

Insurer FBD Holdings, which reported that profits increased 125 per cent to €112.5 million, dipped 0.67 per cent to €8.90, making it one of the market’s better performers.

House-builders and property stocks took a hammering as reports suggested that Fianna Fáil, one of the three parties most likely to participate in government, favoured rent freezes.

Dealers said that the coronavirus fear spread to food stocks. Ingredients specialist Kerry Group was 2.9 per cent off at €119.60.

Insulation maker Kingspan, whose chief executive Gene Murtagh last week said that coronavirus could affect the business if the outbreak dragged on, lost 2.07 per cent to €59.

Another Irish business, sandwich maker Greencore, which reported results earlier in the week, shed 4.18 per cent to close at 215.6p.

Aer Lingus-owner International Consolidated Airlines’ Group, which is due to report 2019 results on Friday, retreated 7.9 per cent to 515.4p. Budget carrier and Ryanair rival EasyJet shed 7.69 per cent to 1,110p.

London’s blue chip index lost 3.5 per cent of its value. Much of the damage was coronavirus-related. However, advertising giant WPP could not purely blame the outbreak as its shares plummeted 16 per cent to 761.6p after its reported that its most-watched measure of revenue, which removes pass-through costs, fell 0.3 per cent to £10.8 billion in 2019.

Standard Chartered fell 3.5 per cent after the bank said a key earnings target would take longer to meet as the epidemic adds to headwinds in China and Hong Kong.

European stocks marked their weakest close in more than four months on Thursday. The pan-European Stoxx index, which retreated 3.8 per cent for the day, has fallen more than 10 per cent from a record high hit on February 19th.

Air France KLM lost 7.17 per cent to close at €7.38 as investors ditched airlines fearing travel will suffer as the epidemic continues. German group Lufthansa suffered similarly, shedding 6.05 per cent to €12.27.

Wall Street was hammered by fears that coronavirus would hit growth and company earnings.

The main indexes plunged on Thursday in their sixth straight day of declines with the S&P 500 confirming its fastest correction in history as the rapid global spread of coronavirus intensified investor worries about economic growth.

Bank of America slashed its global growth forecast to the lowest since the peak of the financial crisis. Additional reporting – Reuters

1 Coronavirus: Construction sector most significant part of new shutdown
2 British exceptionalism backfires in style as Johnson tests positive for coronavirus
3 Volkswagen burning through €2bn in cash per week
4 Can husband keep savings and half the house in divorce?
5 Wetherspoon’s panto-villain chairman may have the last laugh
6 Retail landlords worried rents will dry up during Covid-19 crisis
7 How to . . . move (almost) everything to your new phone
8 Usit travel group in liquidation due to coronavirus crisis
9 UK needs to be honest about its Covid-19 strategy
10 Rivian takes on Tesla with big batteries and subtler approach
Real news has value SUBSCRIBE