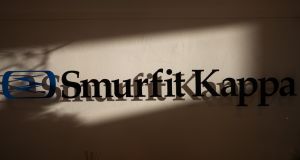 Investors tracking the Iseq index are essentially buying only “six names” in a highly concentrated market, leading to risks if one or two of these run into difficulty, according to Fabio Di Giansante, the Dublin-based head of large-cap European equities at Amundi, Europe’s largest asset management group.

Still, he said, large Irish-listed companies are “high growth” and exposed to some of the investment world’s biggest “mega trends”, including the green agenda, the prospect of incoming US president Joe Biden presiding over massive infrastructure spend, and improving nutrition demands.

Mr Di Giansante declined to identify individual Irish stocks for compliance reasons at Amundi, whose Irish hub is responsible for the management of €43 billion of assets and employs 350 people.

CRH shares have surged as much as 24 per cent since the US presidential election, fuelled by speculation that the group, which is the biggest roadbuilder in that country, will be a key beneficiary of Joe Biden’s $1.9 trillion (€1.6 trillion) economic recovery plan.

Paddy Power owner Flutter’s shares have surged by more than 200 per cent from March lows on the back of its continued investment in the rapidly opening US gaming market. Meanwhile, Kingspan is a global leader in insulation, though its stock has been hit recently by revelations about the company at an inquiry into the Grenfell London tower block fire that killed 72 people in 2017.

“It’s a very peculiar index in Ireland. It’s very much a growth index,” said Mr Di Giansante. “But it’s very much – especially the large-cap index – concentrated on six names. If two of them go really bad, that can have an impact on the overall index.”

The smaller Irish-listed companies are more exposed to the domestic economy and Brexit, Mr Di Giansante noted. Still, he said that with a Brexit trade deal in place and borrowing costs still near historic lows, mergers and acquisitions may continue to be a theme across mid-caps. CPL Resources and Applegreen are currently in the process of being taken over.