Irish companies get permission to list in Hong Kong 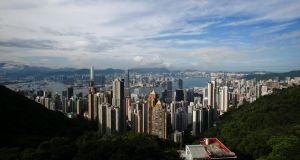 The HKEX is the fourth largest exchange in the world

Irish companies can now list on the Hong Kong Stock Exchange, which is ranked as one of the world’s biggest fund-raising markets. The move comes after an application by Dublin-headquartered company Q3 Medical to the HKEX for Ireland to be approved as an acceptable jurisdiction.

This marks the first time Irish-incorporated companies have been given permission to float on the exchange, which has topped the global charts for IPO fundraising on six occasions over the last ten years .

It comes more than a year after Q3 first announced plans for an initial public offering (IPO) on what is the third largest exchange in Asia behind Tokyo and Shanghai, and the fourth biggest globally.

The company said it expects to raise more than €125 million from the flotation.

Q3 is a Dublin-headquartered holding company, with operations in Germany, China and the United States. It is focused on acquiring medical device businesses with revenues of up to €10 million with its main area of interest being companies that are developing, manufacturing, and distributing minimally invasive devices for the treatment of patients with cardiology, peripheral vascular and non-vascular diseases.

The company’s products are sold in more than 50 countries worldwide through a number of subsidiaries, including QualiMed, AMG and Q-San.

“We are extremely pleased with the Hong Kong Stock Exchange’s approval of Ireland as an acceptable overseas jurisdiction for the purpose of Irish companies seeking to list on the exchange,” said Eric Mangiardi, the company’s chief executive. “This represents a significant opportunity for Q3 Medical and other Irish companies to pursue financing opportunities through a public listing in Hong Kong.”

A spokeswoman for the HKEX said the exchange now allows companies in 28 jurisdictions to list on the exchange. Some 307.8 billion Hong Kong dollars (€35.9 billion)was raised by 160 companies through listings on the HKEX last year, with Budweiser and Alibaba among those opting to float on the exchange in 2019.

HKEX chairwoman Laura Cha recently told CNBC the exchange had suffered a hit to trading volume throughout several months of 2019 due to protests in the protectorate but that it had rebounded in recent weeks ahead of the coronavirus outbreak.