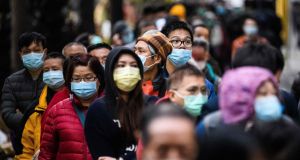 Markets reacted well to a Chinese TV report saying researchers at Zhejiang University had found an effective drug for the coronavirus. Photograph: AFP via Getty

European markets neared record highs on Wednesday as the mood among investors was lifted by upbeat earnings for several stocks and reports of progress in treatment for the fast-spreading coronavirus.

A Chinese TV report said researchers at Zhejiang University had found an effective drug for the coronavirus, while Sky News said researchers had made a “significant breakthrough” in developing a vaccine.

Although the World Health Organisation played down the reports, markets bet that the outbreak would be contained soon.

The Iseq closed up 0.9 per cent in line with the more positive sentiment across Europe. Smurfit Kappa advanced 6 per cent to €34 after the cardboard box maker reported solid growth for 2019 and gave a bright outlook, updating investors on the progress made in integrating recent acquisitions.

The Ftse 100 overturned earlier losses to rise 0.6 per cent, while the mid-cap Ftse 250 added 0.4 per cent. Both indexes ended higher for the third straight session.

Tobacco group Imperial Brands slid 6.6 per cent, its worst day in more than four months, after it forecast lower profit because of a US regulatory ban on some flavours of cartridge-based vapour devices.

After noon, GlaxoSmithKline skidded 4.2 per cent on its worst day since early October, as cheap competition to its respiratory medicines led to fourth-quarter earnings missing analysts’ estimates.

By contrast, Smurfit Kappa rose more than 6 per cent on its London listing, pulling peer DS Smith up with it.

House builder Barratt climbed 2.2 per cent higher after announcing an increase in first-half earnings and a special dividend.

London-listed Irish exploration company Tullow Oil rose 4.6 per cent after a source said the energy firm plans to cut a third of its staff to save about $20 million. Its shares have tanked nearly 75 per cent since November amid a plethora of setbacks.

Drugmaker Novo Nordisk rose 4.6 per cent and industrial company Valmet and chipmaker Infineon both surged more than 10 per cent after results, taking the pan-European stock benchmark Stoxx 600 index up 1.2 per cent in its third day of gains.

Aircraft manufacturer Airbus fell 0.8 per cent after the company said it was prolonging a planned closure of its final assembly plant in Tianjin, China, as a result of the coronavirus emergency.

Wall Street rallied for a third straight day on Wednesday after the release of positive US economic data, though the Nasdaq pulled back from record levels as losses in Tesla shares weighed.

Tesla dropped 14.1 per cent after a six-day run that saw its shares surge about 60 per cent. A senior executive in the company warned the coronavirus outbreak in China would delay deliveries of Model 3 cars made at its Shanghai plant.

Coty jumped 11.9 per cent as the cosmetics maker beat estimates for quarterly profit and revenue. Ford Motor Co tumbled nearly 10 per cent after it delivered a weaker-than-expected 2020 forecast.

Spotify Technology fell as much as 5.8 per cent in early trading after it said it had acquired sport and entertainment media company the Ringer in bid to further expand beyond music and capture more podcast growth. – Additional reporting: Reuters

3 High levels of public investment to be maintained for coming years, Donohoe says

8 BoI to close branches in North, property prices to rise 4%, and tricky vaccine issues for employers