Market report: Amazon fell more than 5 per cent after reports that president Trump was looking to target the company by changing its tax treatment 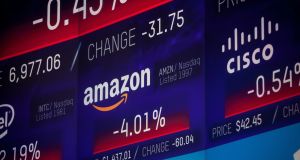 Amazon fell more than 5 per cent after reports that president Donald Trump was looking to target the company by changing its tax treatment.

Shares rose generally yesterday with most European indices bar Germany’s Dax up. Bank of Ireland and AIB rose on news that the Minister for Finance, Paschal Donohoe, has pledged to allow lenders keep the ability to write off losses wracked up during the financial crisis against future corporate taxes.

The move prompted stockbroker Davy to updgrade AIB shares to outperform and add Bank of Ireland to is “conviction” list.

News that it has agreed a deal to exploit its Barryroe prospect fuelled a sharp rise in Providence Resources shares, which closed 30 per cent up on the day at 13 cent, although they were 45 per cent ahead at one point in early trade.

Building material giant CRH’s announcement that it has repaid its most expensive bond debt late on Tuesday and borrowed $1.5 billion through a 10-year and 30-year bond sent its shares 1.75 per cent ahead to close at €27.575.

Pharmaceutical giant Shire boosted The FTSE 100 Index after Japanese group Takeda indicated that it was weighing a takeover bid for the London-listed manufacturer.

Takeover target GKN saw another 1 per cent shaved off its share price as its battle with Melrose Industries intensified.

The fate of the engineering giant will be decided by a shareholder vote on Thursday, with Melrose making a last-ditch attempt to sway investors.

The turnaround firm said it “stands behind its plan to work for the improvement of not only GKN, but the UK economy as well”.

In response, GKN chairman Mike Turner said: “This morning’s blizzard of announcements by Melrose, drafted in increasingly hysterical language, smacks of desperation.” Shares in GKN and Melrose fell 7.3p to 423p and 0.4p to 223.3p respectively.

On the second tier, furniture retailer DFS managed to keep investors on side despite unveiling plunging profits. Shares closed up 14.2p to 184.2p, with half-year pre-tax profits tumbling in line with expectations by 58 per cent to £7 million. However, the group booked a 4.3 per cent rise in revenues to £396.1 million over the six-month period, reflecting increasing scale from its £25 million deal for Sofology.

Wall Street was higher building on strong gains from the previous session on waning fears of a trade war between the United States and China.

Facebook shares continued to get hammered and were down 1.2 per cent. The company faces an investigation by the US Federal Trade Commission to explain how it allowed data of 50 million users get into the hands of a political consultancy.

Twitter fell 5.7 per cent after short-seller Citron Research said it was short on the stock, adding that the company was “most vulnerable” to privacy regulations.

Red Hat shares rose about 4 per cent after the software developer reported better-than-expected quarterly results on strong demand for its hybrid cloud products.

The Nasdaq Composite index was sharply lower on Wednesday, dragged down by losses in Amazon and tech heavyweights such as Apple and Intel. Amazon fell more than 5 per cent after reports that president Donald Trump was looking to target the company by changing its tax treatment.

Apple dropped about 1 percent after Goldman Sachs analyst cut sales estimate for iPhone for March and June quarters, citing weak demand. Intel was down 3.7 percent and weighed the most on the S&P tech index.

Tesla Inc shares fell the most in almost two years as questions about a fatal Model X crash in California last Friday intensified the pressure on Elon Musk’s electric-car maker. March has been brutal for Tesla, with shares falling on all but five days. The trend continued Wednesday with a decline of as much as 9.7 percent, the biggest drop since June 2016, to $252.10. Its unsecured bonds have also hit all-time lows ahead of the release of first-quarter production results expected next week.

US financial markets were little moved by Wednesday’s economic data, which showed US economic growth slowed less than previously estimated in the fourth quarte. Stocks on Wall Street were trading mostly higher, while prices of US Treasuries edged up. The dollar firmed against a basket of currencies, pushing further away from a five-week low in the prior session.