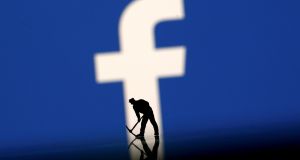 Shares in Facebook fell 4.9 per cent in US trade on Tuesday. Photograph: Dado Ruvic/Reuters

Asian shares fell on Wednesday after Wall Street was knocked hard by concerns about tighter controls on the tech industry, denting a brief global equities recovery driven by hopes that the risk of a US-China trade war was easing.

MSCI’s broadest index of Asia-Pacific shares outside Japan fell 1.5 per cent, turning red for the week, led by information technology shares, such as Tencent. Japan’s Nikkei fell 1.3 per cent.

US S&P500 mini futures fell 0.4 per cent in Asia, a day after the S&P 500 lost 1.73 per cent and the Nasdaq Composite dropped 2.93 per cent, making the benchmark indexes’ fourth decline in five sessions.

The info tech sector was the worst hit with a fall of 3.5 per cent, as investors expect tighter control on the industry following a furore over use of Facebook data by political consultants.

Facebook fell 4.9 per cent on Tuesday, taking its losses to almost 18 per cent since March 16th, when the firm first acknowledged the problem. Twitter fell 12 per cent while Google parent Alphabet fell 4.5 per cent.

Another weak spot was Nvidia, which fell 7.8 per cent after the chipmaker temporarily suspended self-driving tests across the globe after an Uber Technologies autonomous vehicle killed a woman.

Investors rotated out of the tech sector, which had long outperformed the market on hopes of new technologies such as artificial intelligence (AI) and internet of things (IoT).

“There is a sense that there will be more regulations on Facebook or FANG and that the cost of compliance will increase,” said Nobuhiko Kuramochi, chief strategist at Mizuho Securities.

The so-called FANG quartet of tech stocks, which includes Facebook, Amazon. com, Netflix and Alphabet, has been a darling of many investors.

The report that Beijing plans to announce retaliatory tariffs against the US president Donald Trump’s plans for tariffs on up to $60 billion of Chinese goods rekindled worries about a Sino-US trade war.

While the market remains highly vulnerable to news headline like this, recent reports of behind-the-scenes talks between Washington and Beijing spurred some optimism.

“It would be in China’s interest to pursue trade rather than taking retaliatory actions. So eventually, they are likely to avert a trade war and strike a deal that will please (US president Donald) Trump and increase trade,” said Hiroshi Watanabe, economist at Sony Financial Holdings.

“The market is still nervous, and there’s a feeling you never know what Trump will do. But excessive wariness is likely to gradually wane,” he added.